George had said that whenever a ferry is due in port the bus would be there to take people to the Chora so we decided that we would be at the port just before 8am.

We went to the local bakery and bought some pastries and sat on a bench to eat them whilst we waited for the Aqua Jewel to come in.

The Aqua Jewel was on time.  Only a few people got off the ferry but there was no sign of a bus.  We hadn't seen any signs of public transport since we arrived on the island. 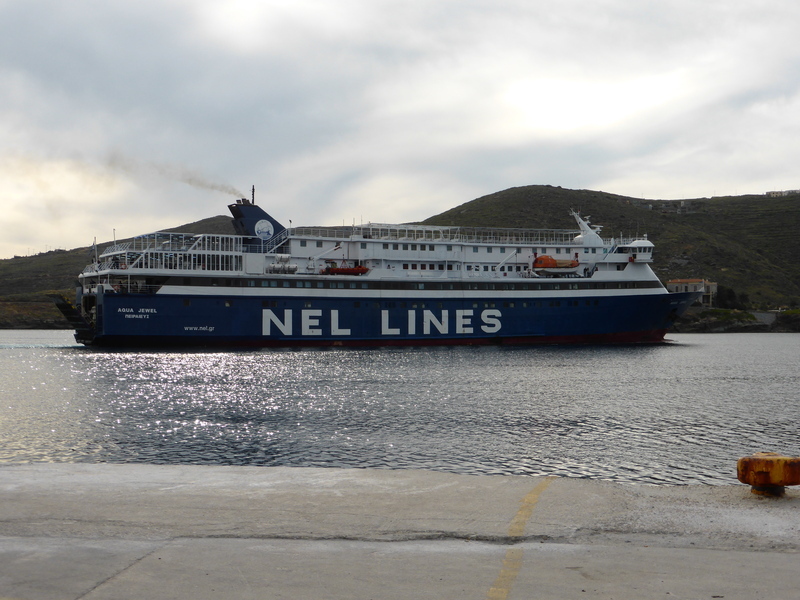 It was clear by now that there wasn't going to be a bus so we decided to bite the bullet and caught a taxi up to the Chora for 7 euros.

It was still quite early and the streets in the Chora were empty and very quiet.  We took in the views across the valley, up to the mountains and down to the bay. 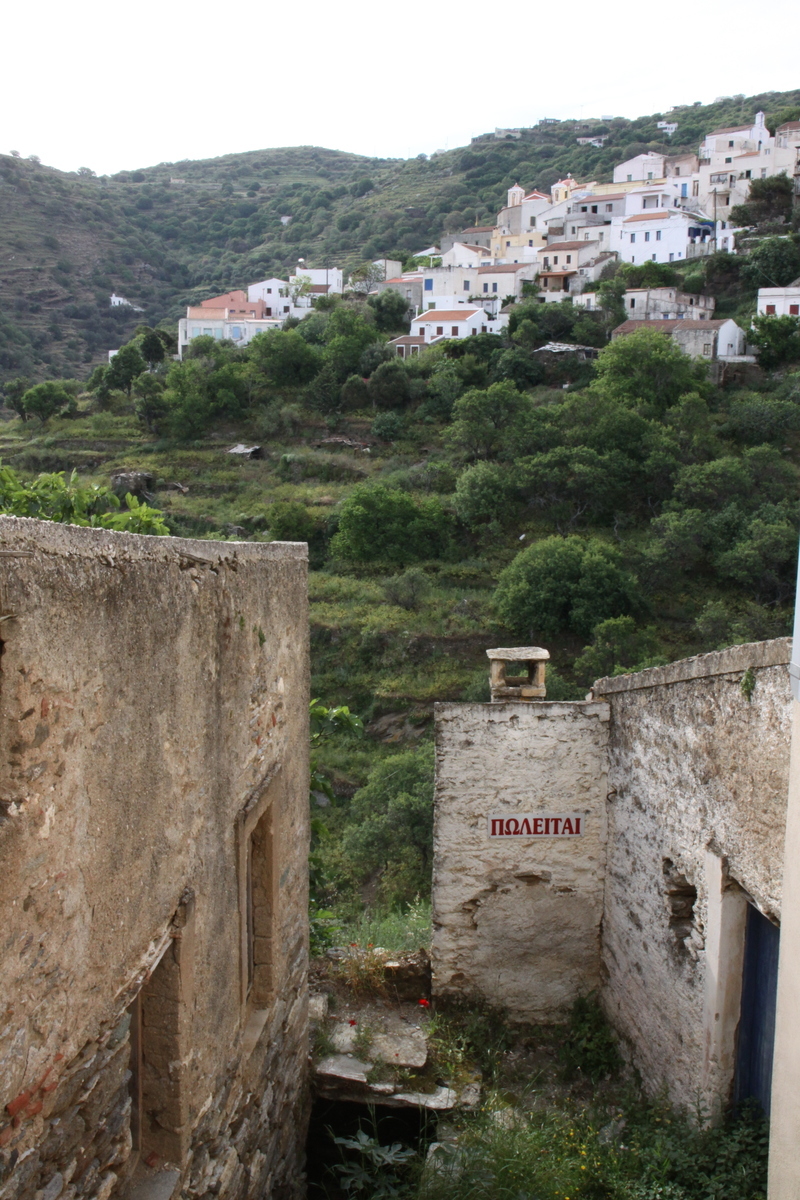 We decided to stop in a cafe for a cup of tea.  We watched with amusement as a refuse collection wagon navigated a very tight squeeze under an archway with inches to spare each side. Vehicles stay on the outskirts of the Chora as the streets are so narrow. 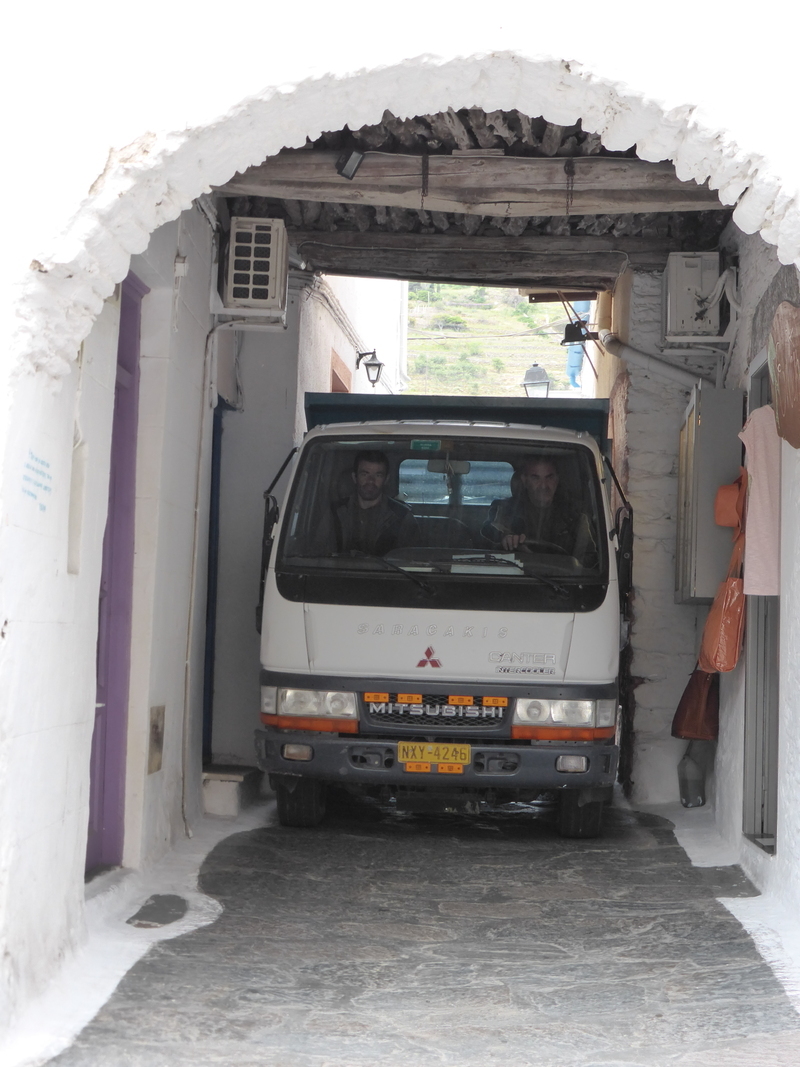 Peter went into cafe to pay and asked directions to the Lion of Kea.  Peter  said that we need to walk straight up the main street of the Chora.
Just a little further up we came to a split in the street - one on the left going down and one on the right going up. I don't know what possessed us but we decided to take the path to the left.  This was not the right way to go! 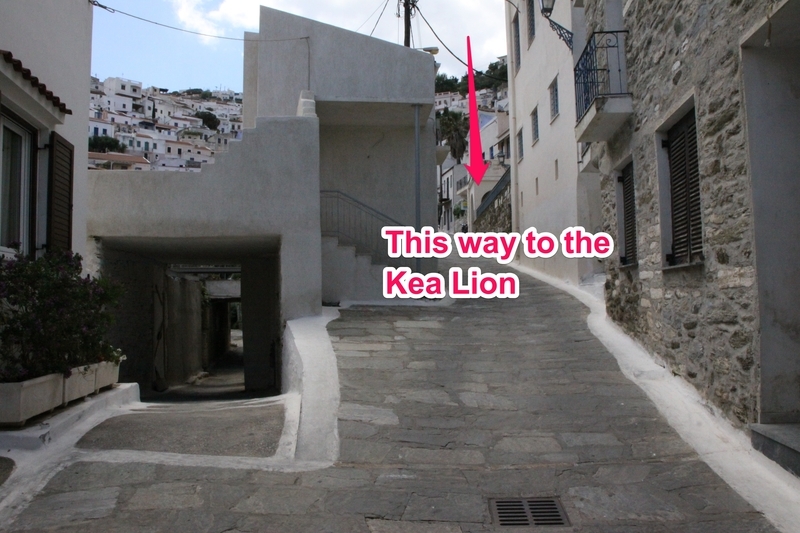 After walking for a while the path became narrower and although swathed in beautiful spring flowers, there were also quite a lot of nettles and thistles.  I had read that this was a simple straight forward walk of about 1.5km from the chora - not this semi perilous trek over makeshift stone steps.  (OK so that's a bit of an exaggeration!)  It took us past a small holding with chickens, donkeys and a barking dog. 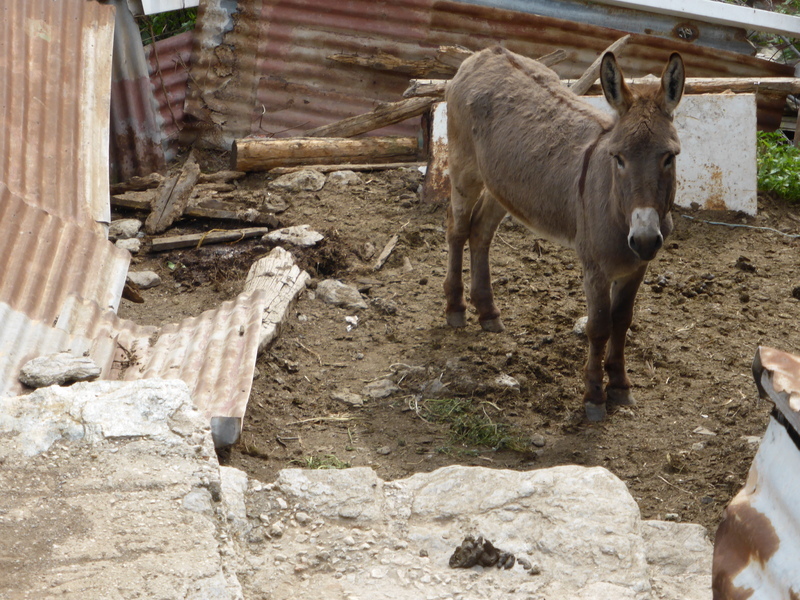 Peter spotted a man on a donkey on a path above us which is when we realised that we should have taken the other pathway straight up.
Once back on the main path we could see the lion in the distance.  We walked around and down some deeply carved stone steps to the lion   My vertigo began to kick in a bit but I did manage to clamber onto the lion for a photograph or two! 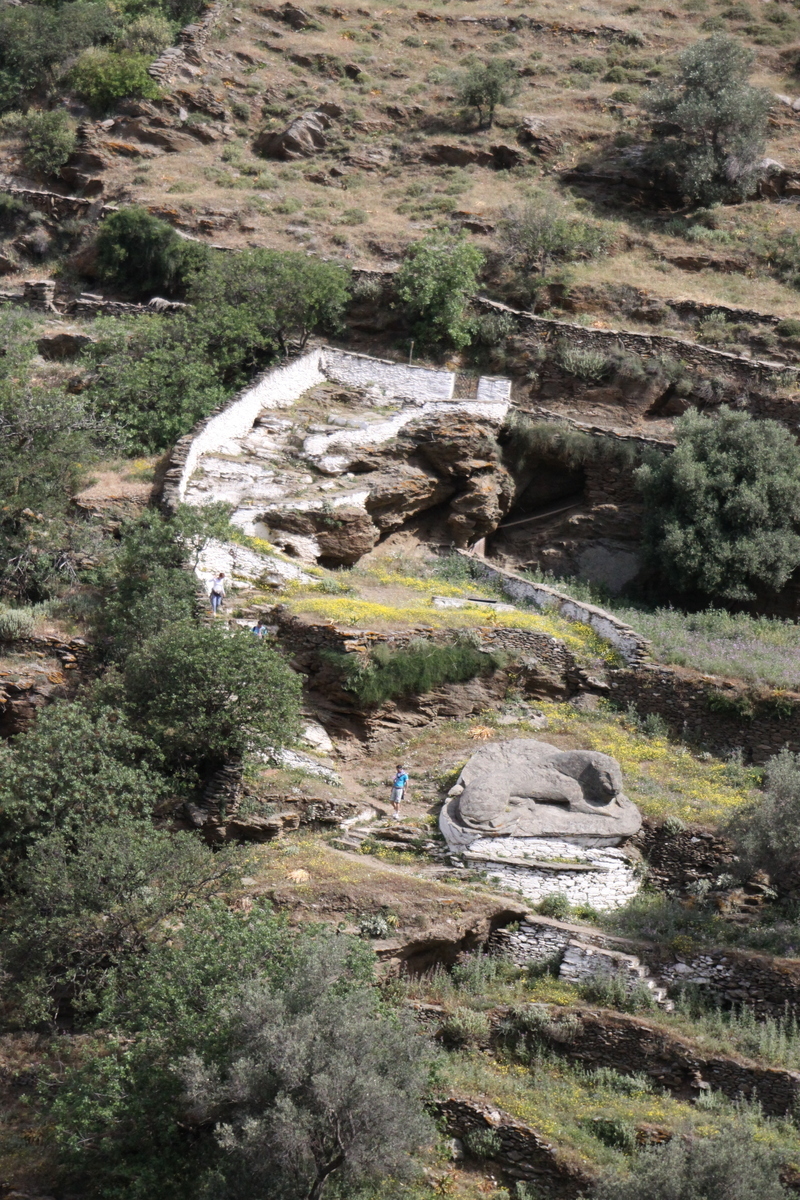 We returned back to the Chora along the wide path which lead us straight to the main square. 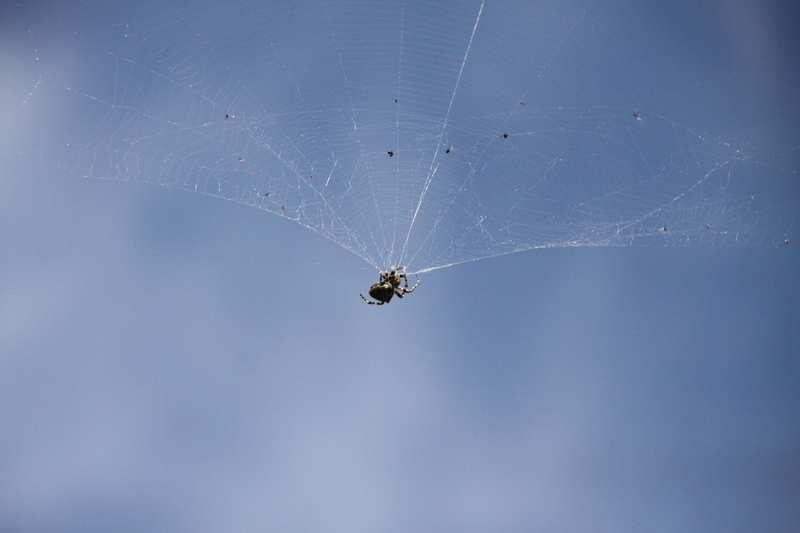 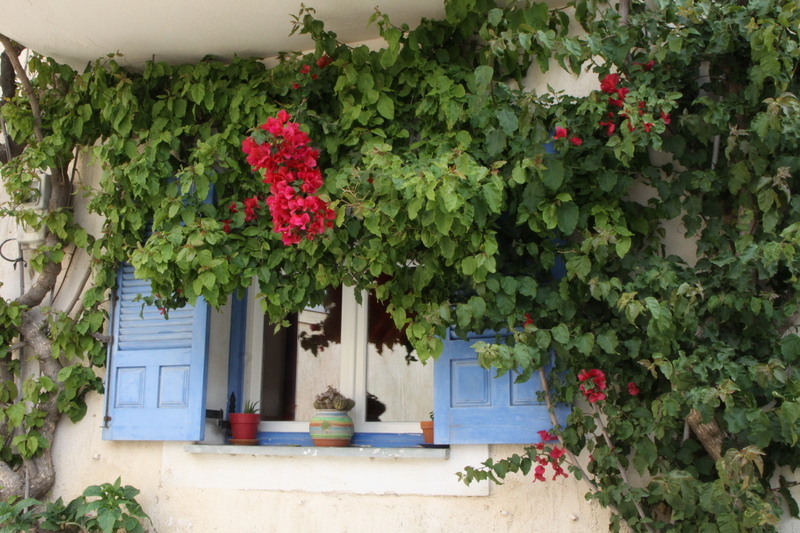 We stay for lunch in Ton Kalofagadon restaurant in the town square in front of the town hall which overlooks the valley.  The restaurant comes highly recommended by Matt Barrett and has great reviews on Trip Advisor and we weren't disappointed. The waiter is very friendly and helpful and tells us what is on offer.  I choose the beef cooked in tomato and herbs and Peter had the local pork dish. Delicious. 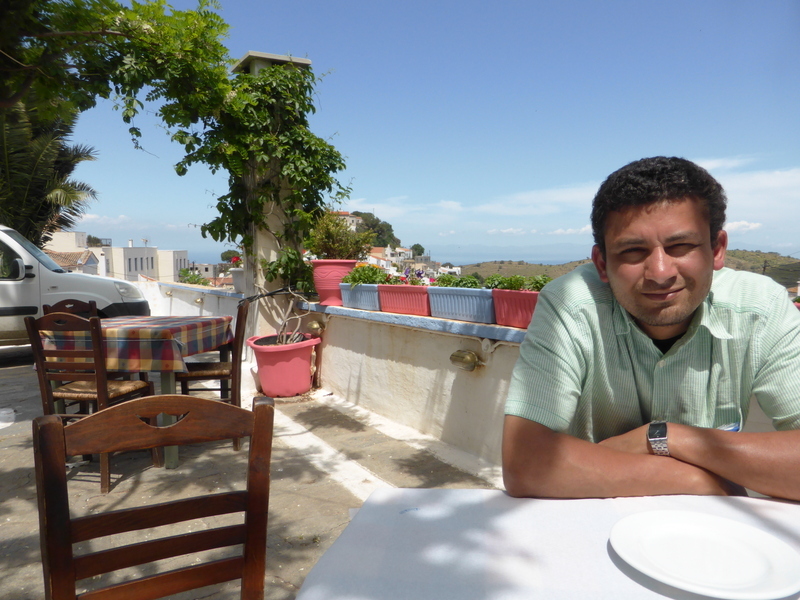 After another walk around the Chora we catch a taxi back to Korrisia.

The old abandoned tower of the enamel factory
http://www.greeka.com/cyclades/kea/kea-excursions/kea-factory-enamel.htm 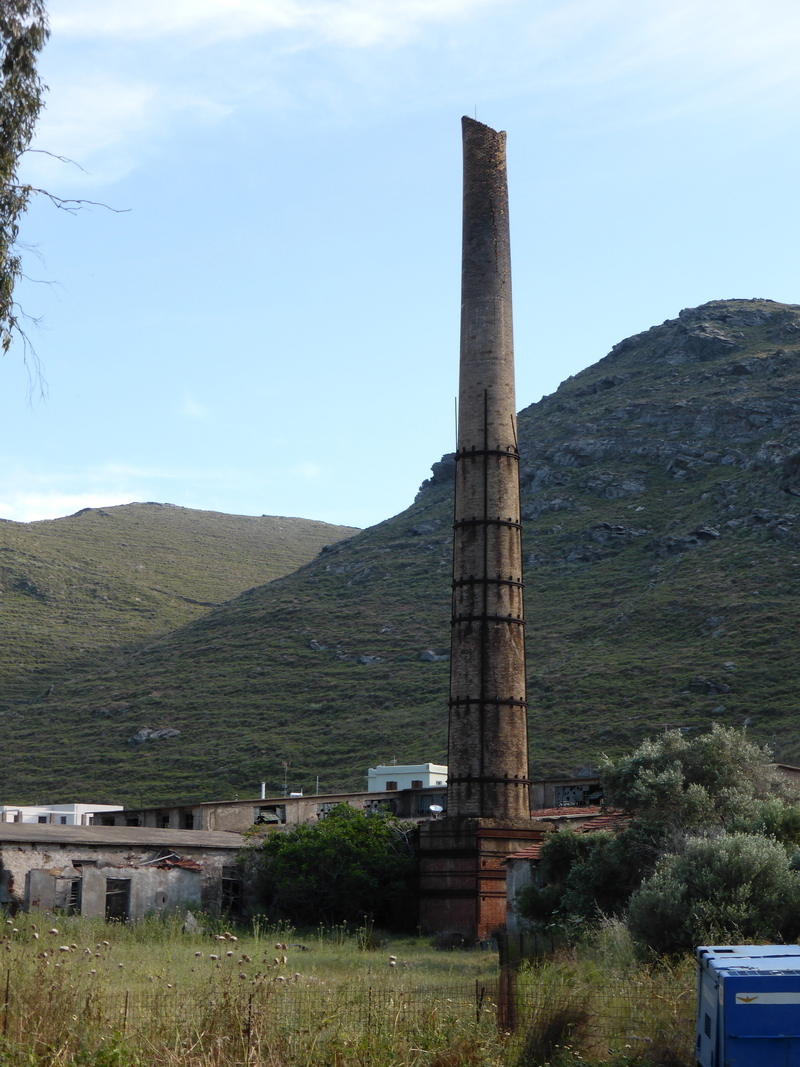 Our stay on Kea has been short but has been a great start to the holiday.  It's a shame that the public transport was't running to explore the island further (or that I have the guts to drive in Greece) but this little island is a real gem.