Thursday 8th May 2014 - Serifos - Another Windy Day in the Chora

Matoula has raised the bar with the breakfast again today! 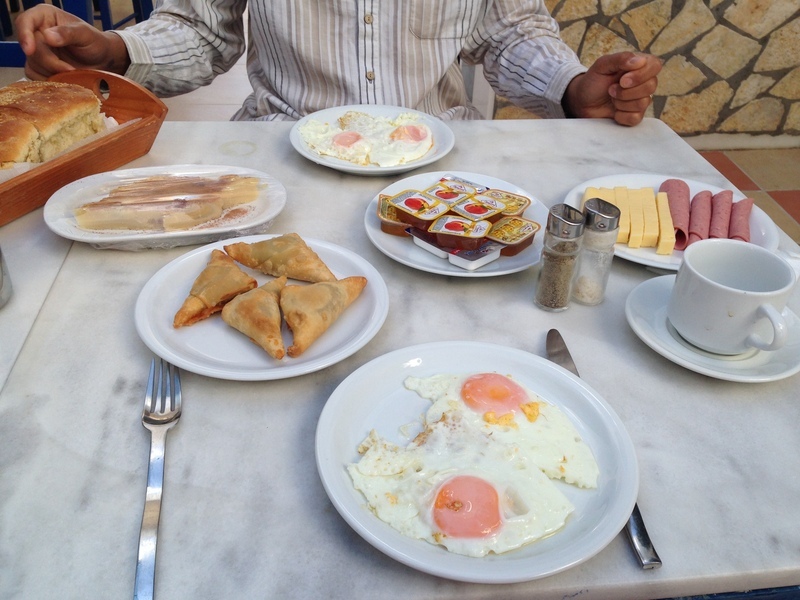 We decide to go out straight after breakfast and catch the bus directly to the Chora.  There is no let up with the wind.  We had met a couple of Dutch tourists at the bus stop who were travelling around the islands as part of a walking holiday with another couple. They were going to do one of the recommended walks above the Chora.

Peter was keen to explore the area above the Chora further and set off on his own across the very windy hills! 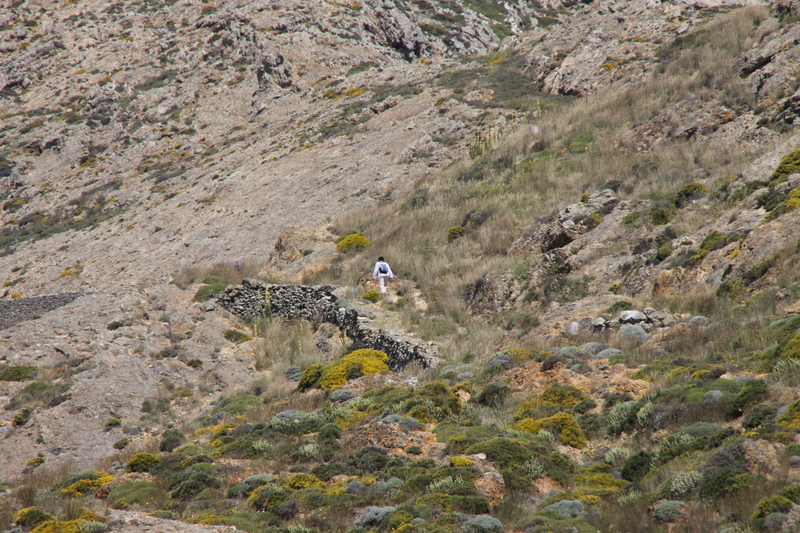 I decided to explore the lower Chora which is very beautiful - in an understated way. This is the beautiful Chora that I'd read about! 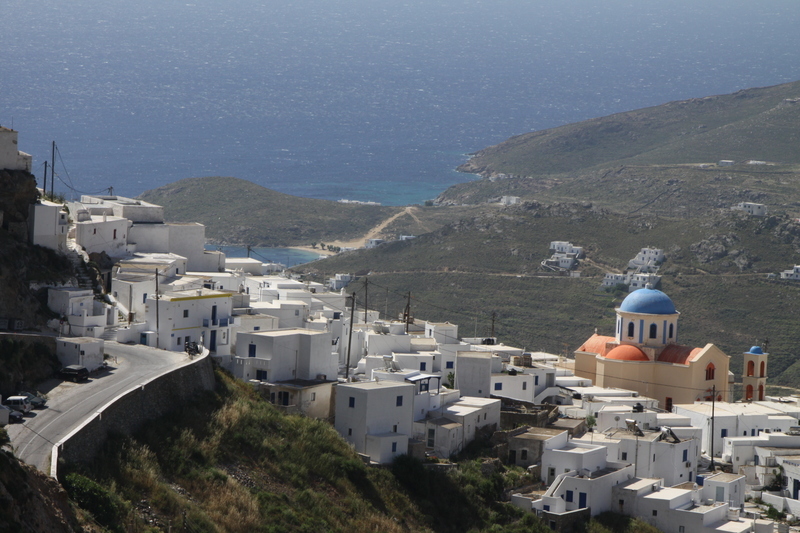 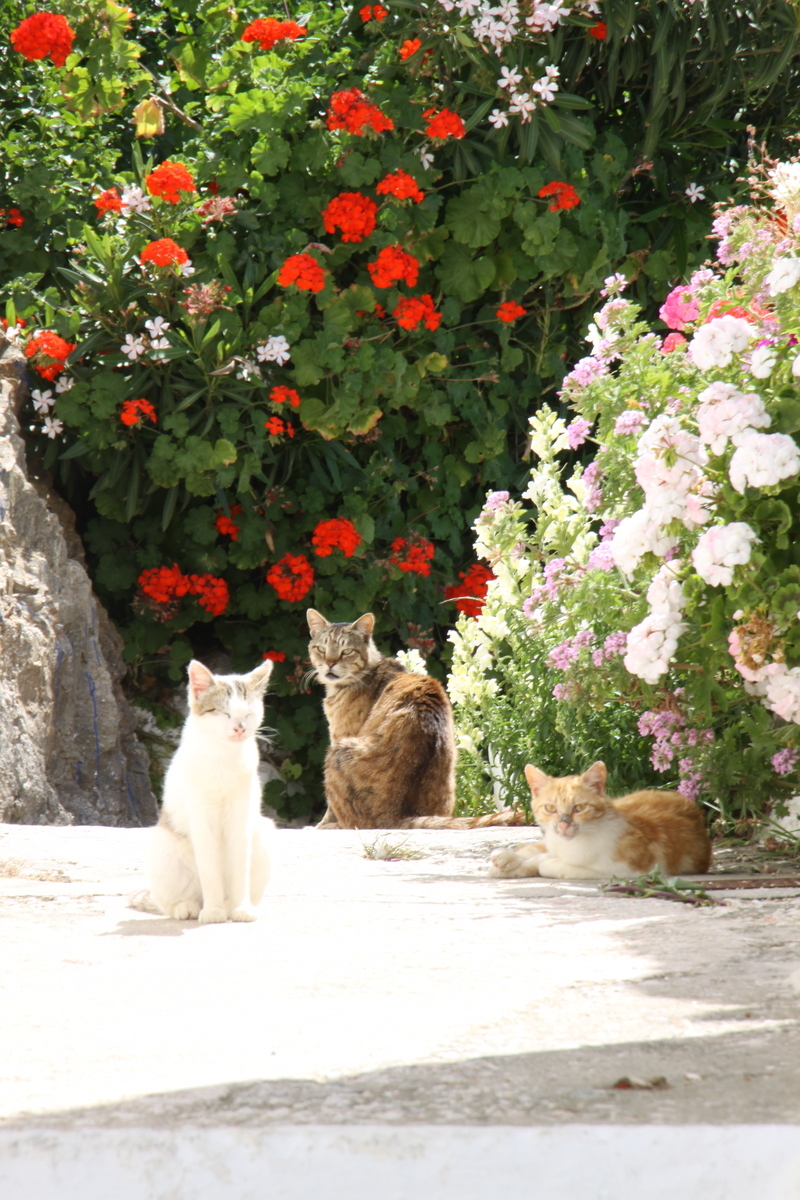 By following the winding streets I found myself on the path up to the Kastro. 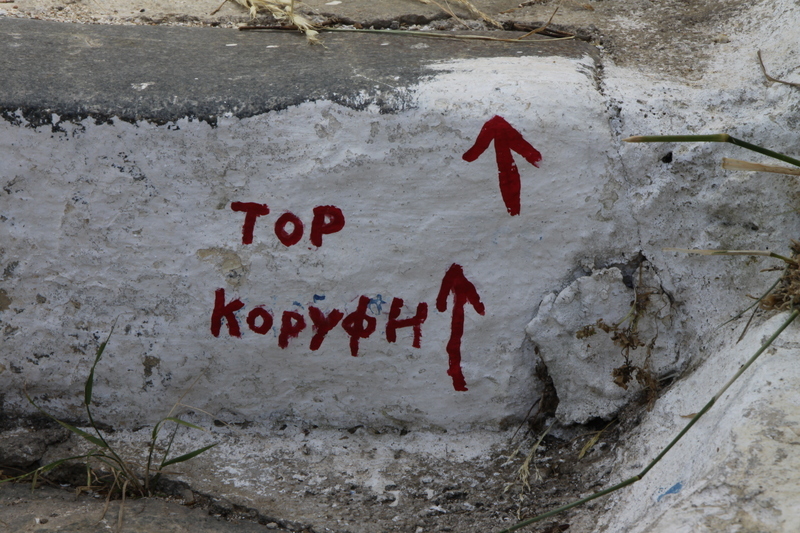 I tried to brave it to the top but it was just a little bit too blowy and I'm too much of a coward! 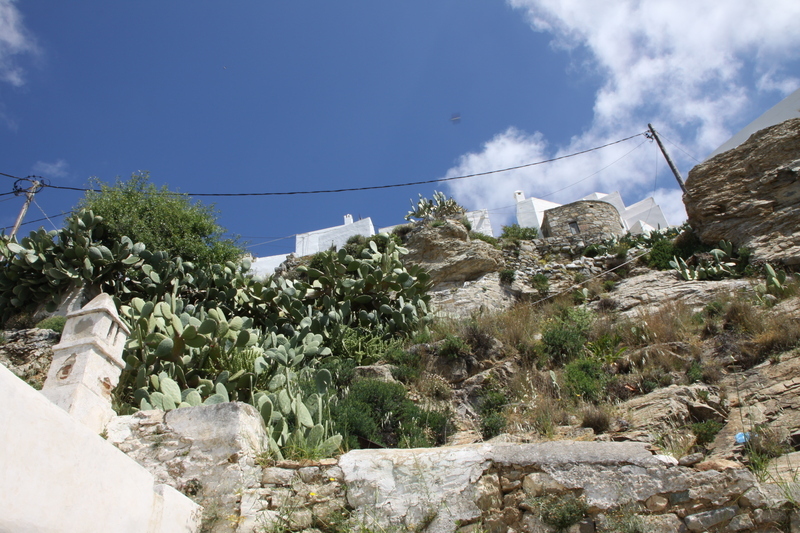 I end up back in the square which was completely deserted so I had to take advantage of that.  I have two pots of tea in Kafeneio Tou Stratou. 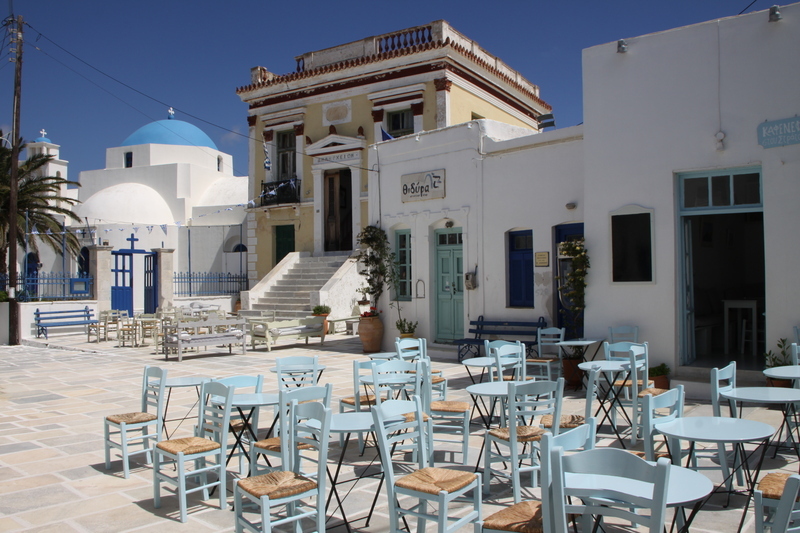 I am told that I can go into the Town Hall which is a working Town Hall.  I walk up the main steps and once at the top leads me straight into an office.  Two ladies sit at separate desks and in another chair at a desk is a child of about 5 years of age.  This is a bit different to the Town Hall I work in! 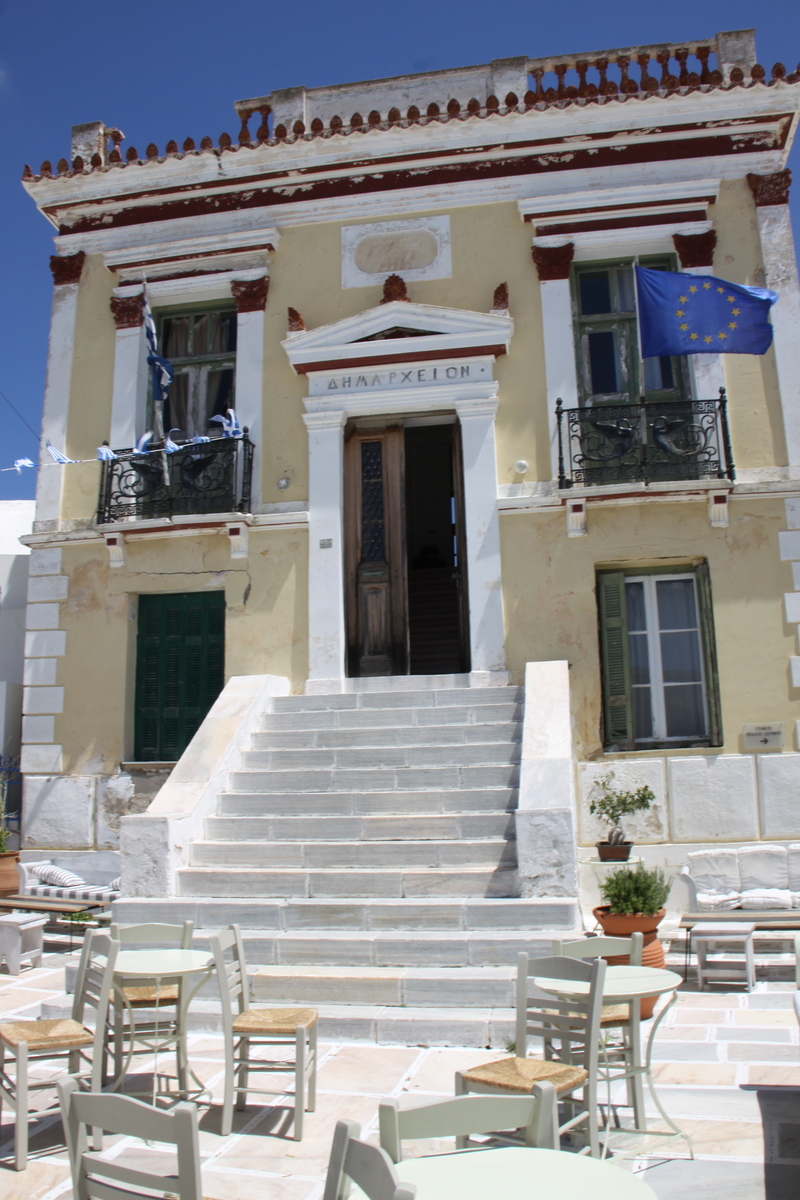 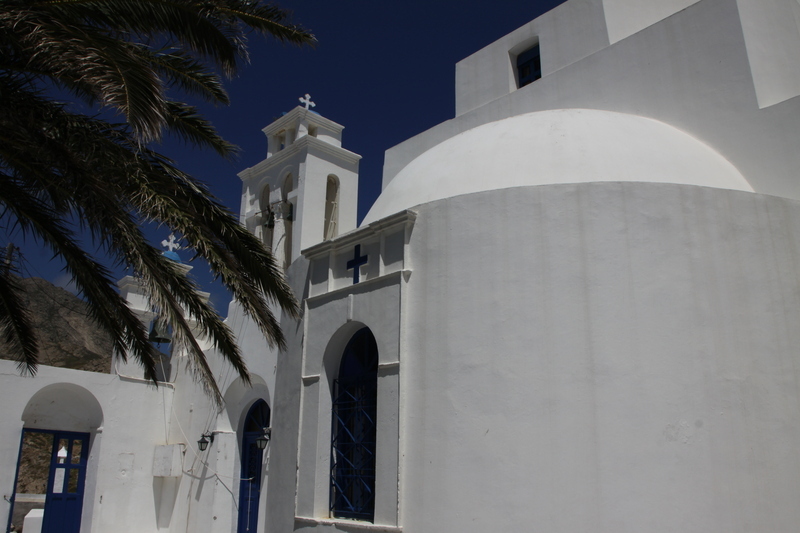 We go back to Tou Stratou for lunch.  It's really windy so we decide to inside.  We order the special Cretan fennel pie and yoghurt with preserved grapes.  The lady told us that here mum made them in Crete and sent them over.  She asked us if we wanted to try the tea of the island.  I knew what this would be as I have been offered the 'tea of the island' on many islands!  Also known as Mountain Tea it is made with the leaves of Greek sage.  Peter stuck with black tea. 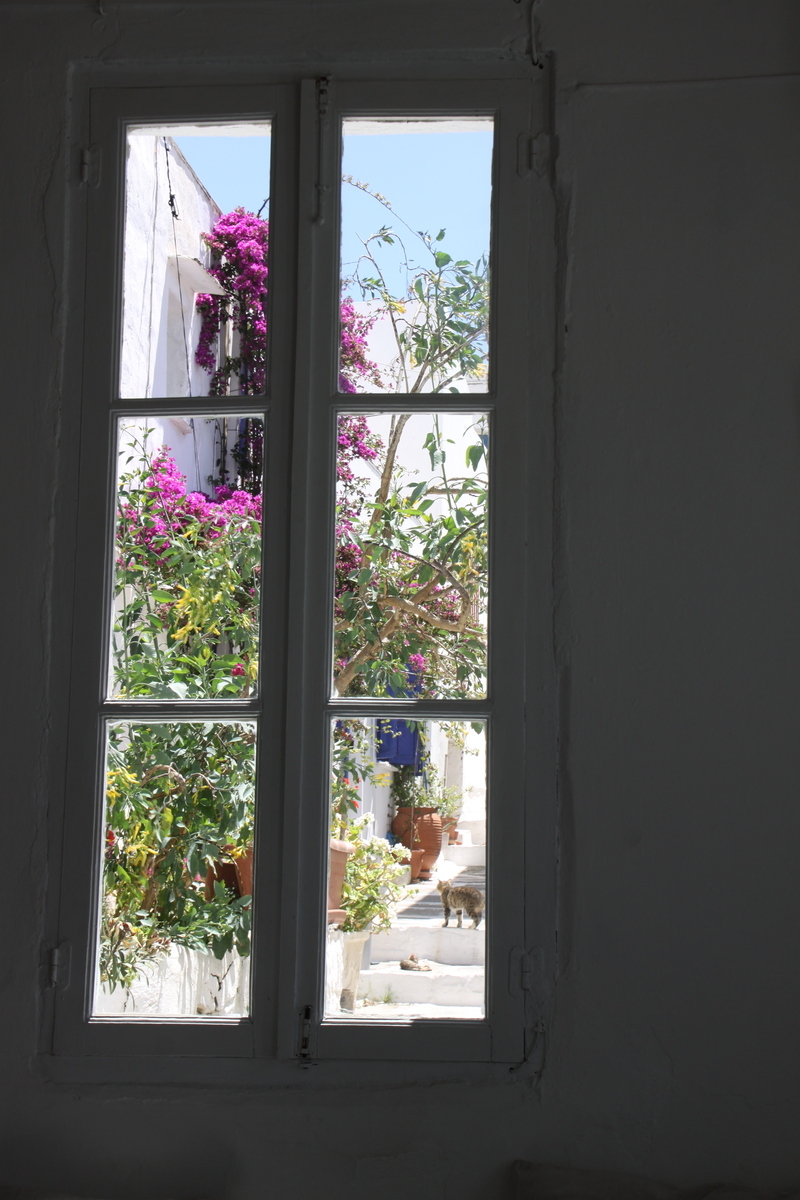 This is our last day on Serifos and want to see a bit more of the island we we decide to catch the bus to Kallitsos
The bus spiralled up bottom clenching hair pin bends where the views were absolutely amazing - though at times the journey was a bit harrowing.  I took some respite in the fact that it was the school bus and used to ferry children from the mountain villages to school in Livadia and back.
It is up here that you can really appreciate the stunning beauty of the island.  As soon as you reach the pinnacle of the mountain you are rewarded with the views of the sea on each side. 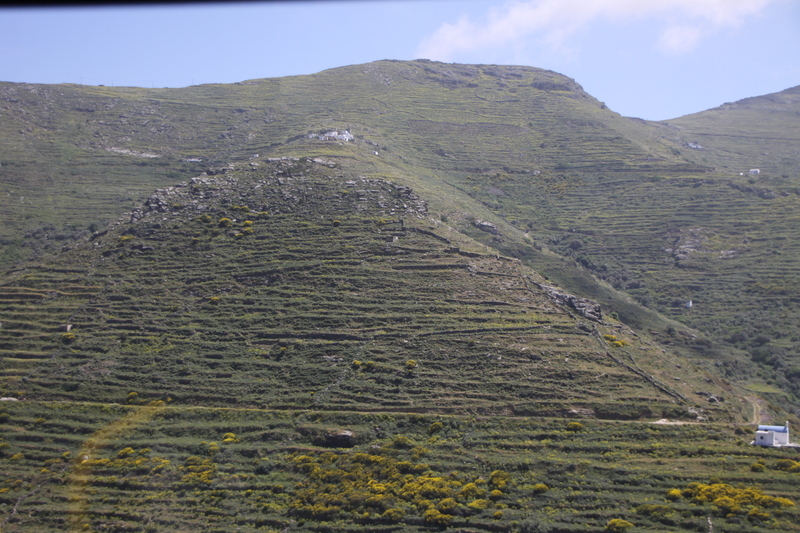 The bus dropped off children in rural mountain villages.  On the way back we stopped at the village Galani for 15 minutes which was enough time to have a cup of tea in a little kafeneio.  We joined some of the villagers at tables outside.  It's at times like this when I wish I knew how to speak Greek but we just exchange smiles and gestures.
Inside the kafeneio is a skinned sheep strewn across one of the tables.  Across the road a teacher brings about 10 young children from the kindergarten onto the bus.  After ensuring they are all strapped in with seat belts we are ready to depart back to Livadia. strapped in.  We take in the views from the mountain tops one last time.

We pass the little white sugar cube houses scattered  over the Chora. 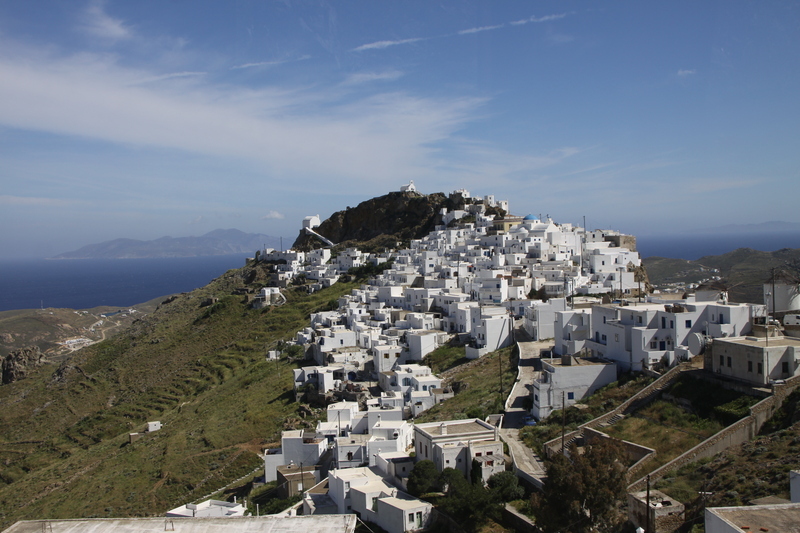 Once back in Livadia we purchase our ferry tickets to Sifnos.  We decide to take the ferry Agios Giorgious instead of the high speed ferry.  There is little between the price and also the departure and journey time however, we'd seen the Agios Giorgios in port every day when we were on Milos the year before and felt we needed at least one journey on her.
We walk back to the Serifos Palace past the cemetery that overlooks the port. 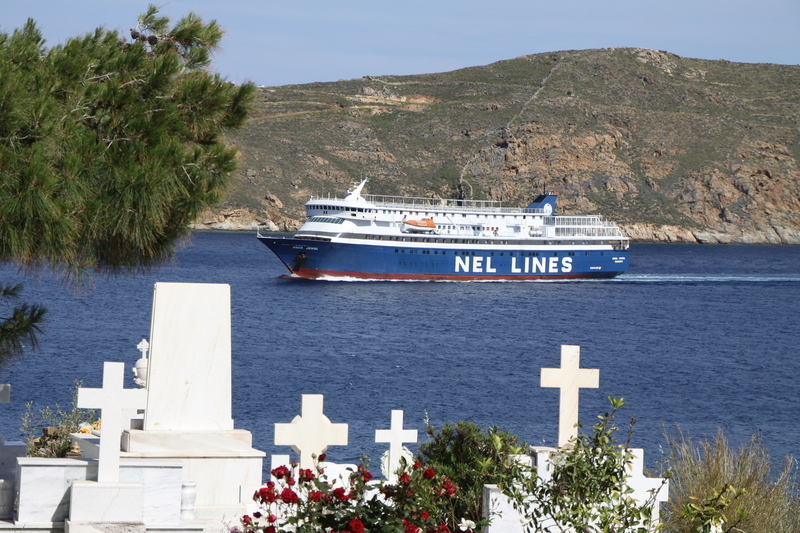 Tonight we are going to eat in Restaurant Gialli which is owned by the same owners of our hotel.  Matoula still isn't smiling but she has put make up on for her evening job and looks nice.  The menu is very good with a lot of choice - much more than the other restaurant on the sea front. To start we have salted cheese (Peter's choice) and garlic sauce.  Peter had grilled sardines and I had kofta.  Very delicious! 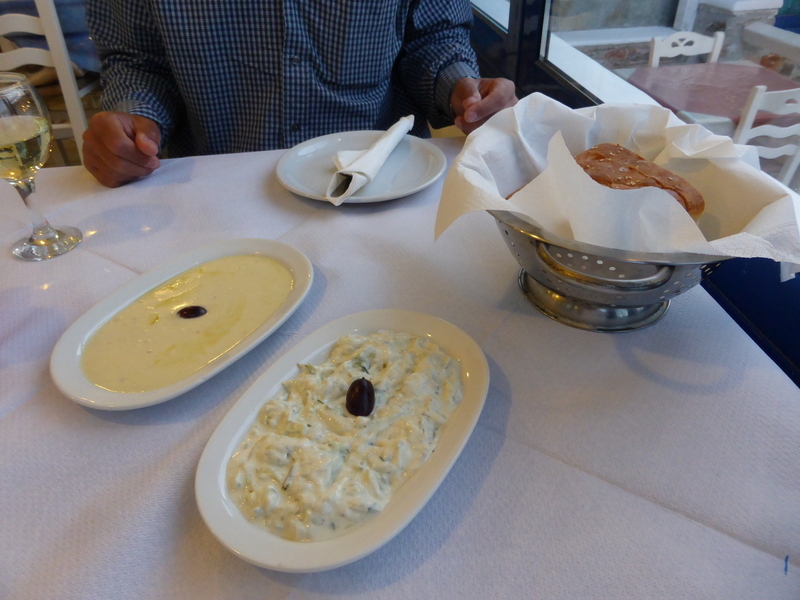 Before we leave we ask Matoula if it is OK to stay in the room until 7pm when we need to leave for the ferry.  With the help of the chef to understand she agrees and we say goodnight.