Today we are going to visit Kimolos - the tiny island just a short boat ride away from Milos.  We're going to catch the 10.30am ferry but get there a little earlier to eat some breakfast and to walk around the little harbour. 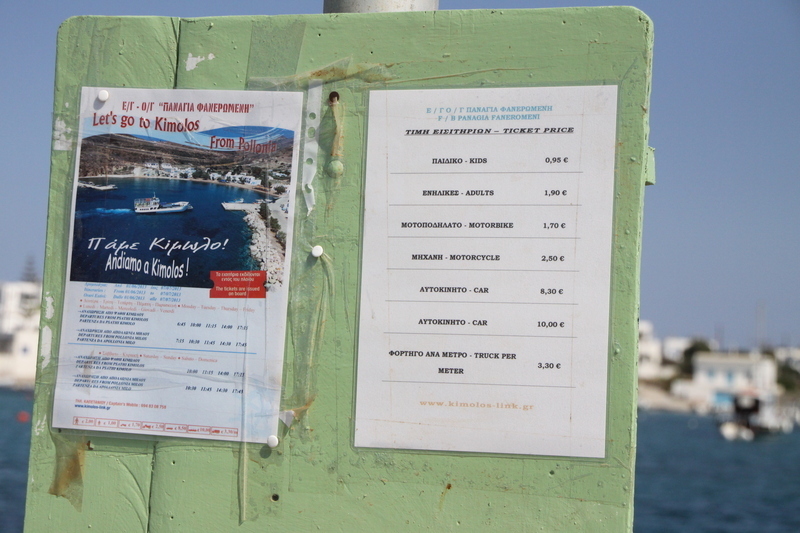 At the port Peter engages in conversation with an elderly Greek lady.  She speaks to him in Greek and he speaks to her in English.  She lives on Kimolos and is going home - that's as much as I can make out though Peter seems to be having a much more detailed conversation with her with the use of lots of gesticulation. 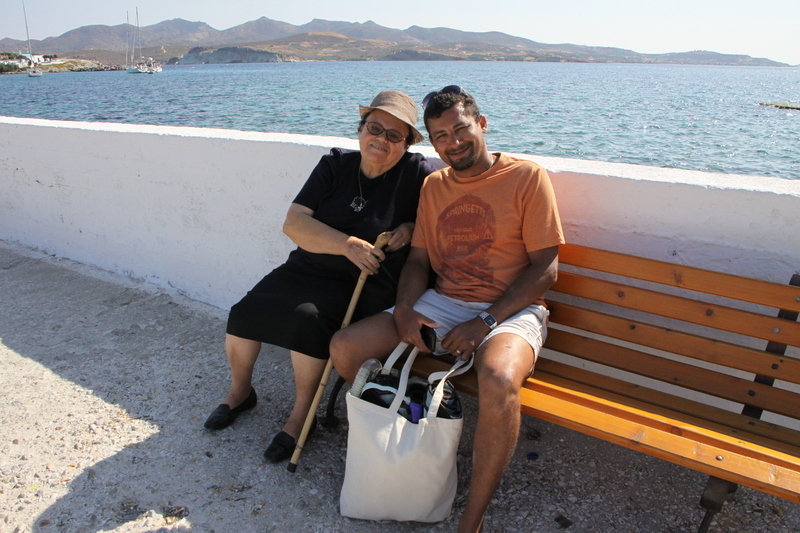 Along the pier wall, fishermen are weighing in their morning catch. 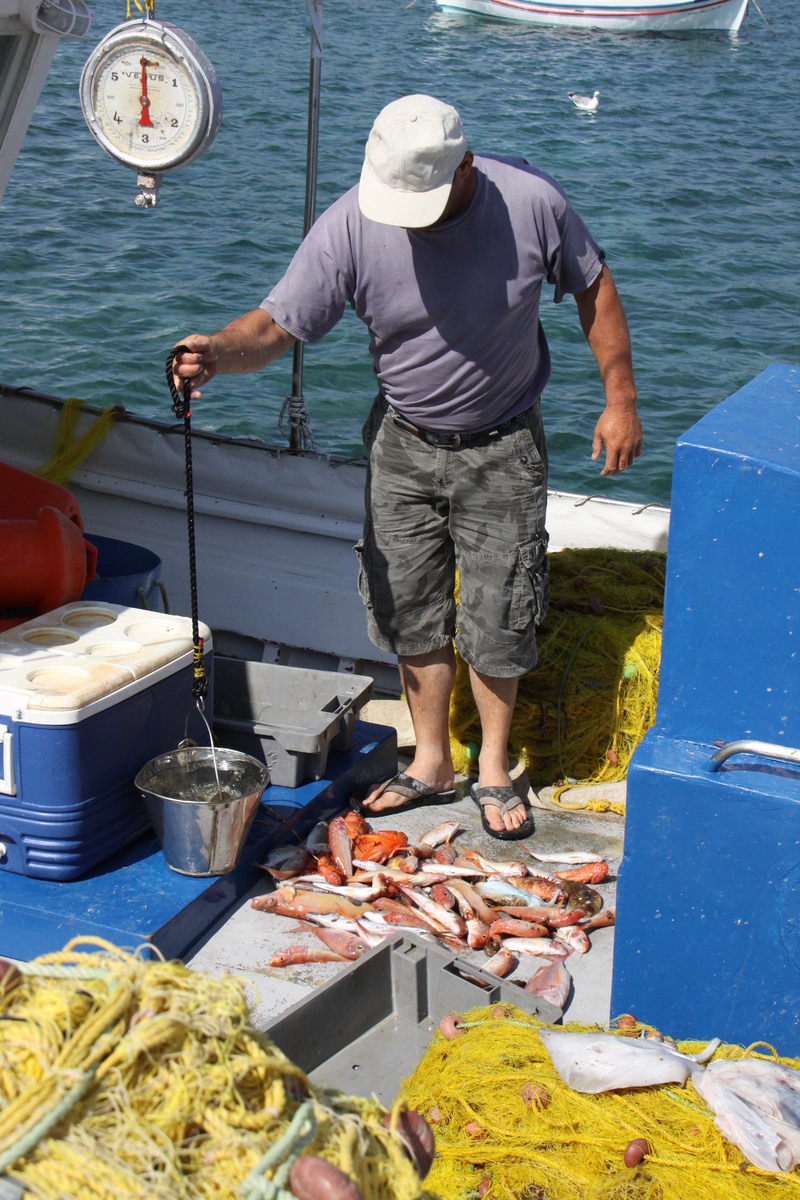 We are fascinated as we watch one of the fishermen debone a monkfish which involves smashing their jawbones with a wooden mallet and cutting the flesh away with a knife.  These are truly ugly fish! 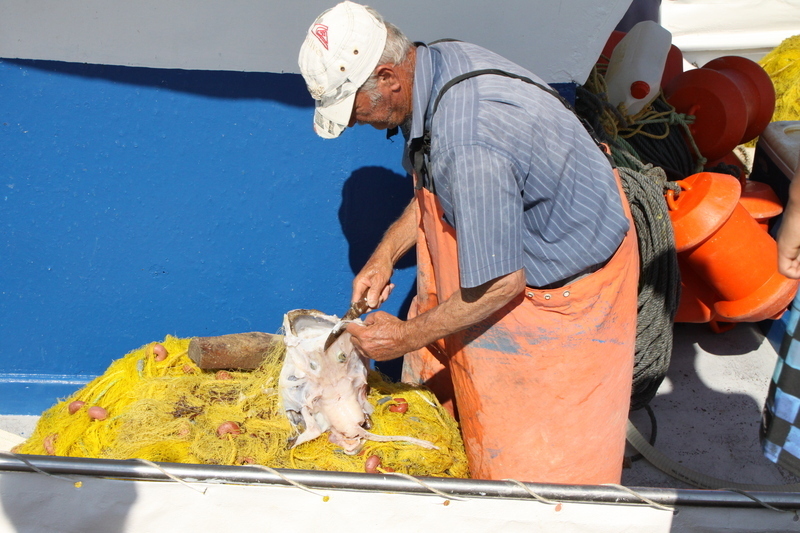 The small car ferry the Pagania Faneromeni arrives and as soon as the cars, bikes and pedestrians disembark we board, pay for our tickets and go up to the deck.  The cost of the ticket is 1.90 euros each, one way.

From the ferry we can see the church on the port of Pollonia and as we sail further out of the harbour we see the Seajet 2 appearing from around the corner from Adamas.  It sails slowly past the huge sharks fin rock jutting out of the water. 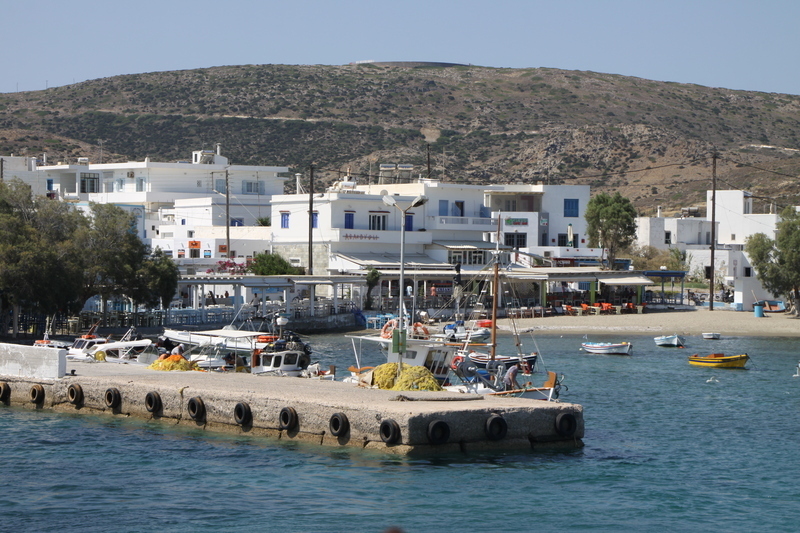 According to the official website of Kimolos, the island covers an area 36 square kilometres and has around 600 permanent residents.  The name Kimolos comes from kimolia meaning chalk which has been mined here since ancient times.  It now has large resources of fullers earth which is used in the production of porcelain.  There are a number of opencast mines to the North of the island and there you will also find a sulpher spa however, it is the South of the island where you will find the good beaches and the sleepy little villages that have hardly changed over the years.  There are no natural springs on the island so water is a precious commodity.
http://www.kimolos.gr/index.php?lang=en

As we approach the harbour of Kimolos the first things we see are windmills scattered along the top of the hillside and below a large blue domed church overlooking the bay. 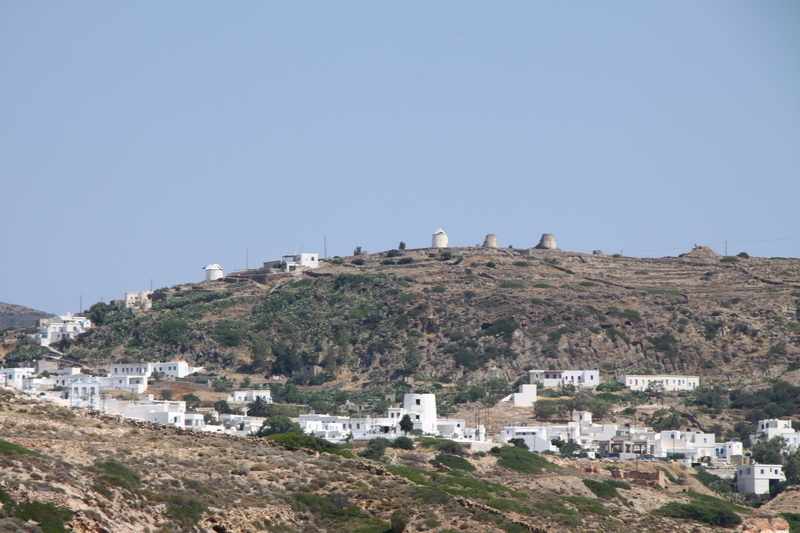 Download IMG_0809.MOV
The port is really quiet apart from some repair works being undertaken to the harbour wall.  There is hardly anyone about.  We don't have time to visit any of the beaches here today which is a shame becuase I had read that there are some exceptional ones on Kimolos.  However, we are going to explore the chora and start by following the main road up from the port.  We reach a sign that tells us that the chora is 300 metres ahead - the walk up is about two kilometres in total. It is quite a steep climb and very hot but the advantage of stopping to drink water is that it's also an opportunity to take in the view of the bay.  The higher we go, the better it is.  We keep the large church in our vision so that we know we are going in the right direction.
It isn't long before we see signs of the kastro with stockade type stones walls lining the narrow labyrinthine streets - originally built to keep out marauding pirates around 500 years ago. 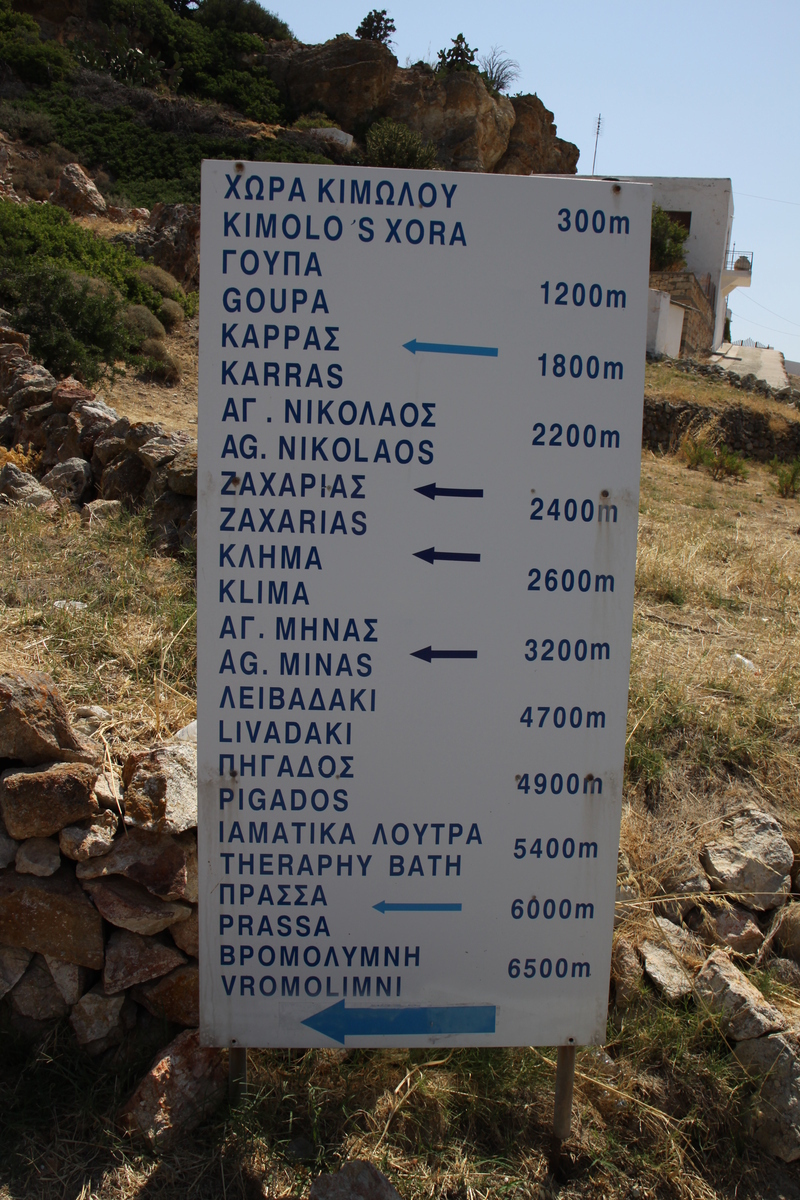 The streets are virtually deserted on the way up to the chora - the only other people we see are a group of workmen carrying out refurbishment on an old stone house.  The kastro is really attractive - so unspoilt.
Thomas Cooks Greek Island Hopping Guide says of the kastro:
"The Kimolos stockade type kastro is a younger brother of the better known example on Antiparos.  The basic concept is the same with both buildings: a strong rectangular fortification wall lined with apartments that face into a central courtyard area each with its own external staircase.  There are however, significant differences between the two.  Instead of a large courtyard area and a central tower, the Kimolos kastro has a second inner ring of houses within which stands a church complete with gateways.  It is known as the inner kastro.  It also has a second gate in its outer wall and is built on the side of a hill so each two storey unit is at a different height to its neighbour.  There are dated stones over the gateways - one saying 1650 and the other 1647 however these are believed to commemorate refurbishment or building works after major pirate attacks. It is likely that the Venetiain kastro was built between 1485 and 1537.  Today the kastro is an odd mix of good preservation and total ruin."  You will see examples of this everywhere - decayed stone buildings and the development of trendy bars sitting together in complete harmony.  Unfortunately the Folk and Maritime Museum of Kimolos doesn't appear to be open - it is highly recommended in my guide book and is made up of some of the kastro houses. 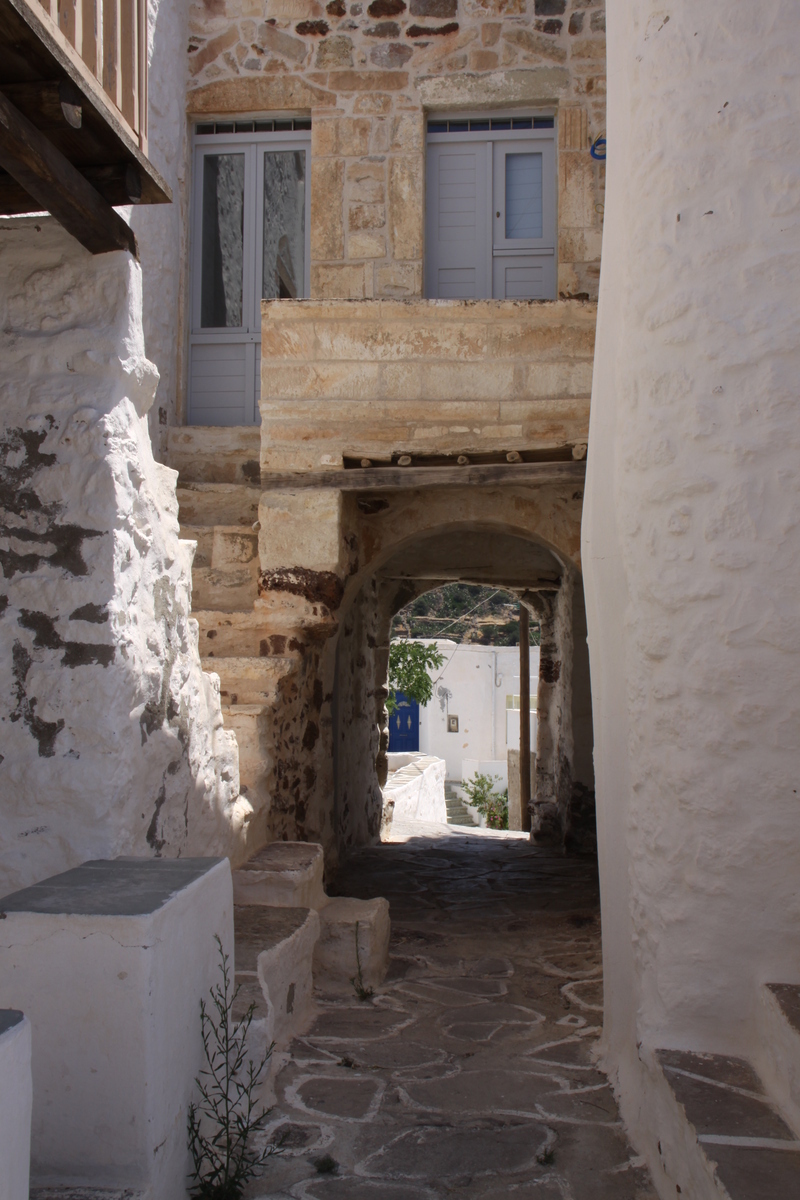 It's lunchtime.  There are quite a lot of little tavernas dotted about but we decide to eat in a taverna just behind the large church called Panorama, which as you can imagine, offers fantastic views over the island and right down to the bay. 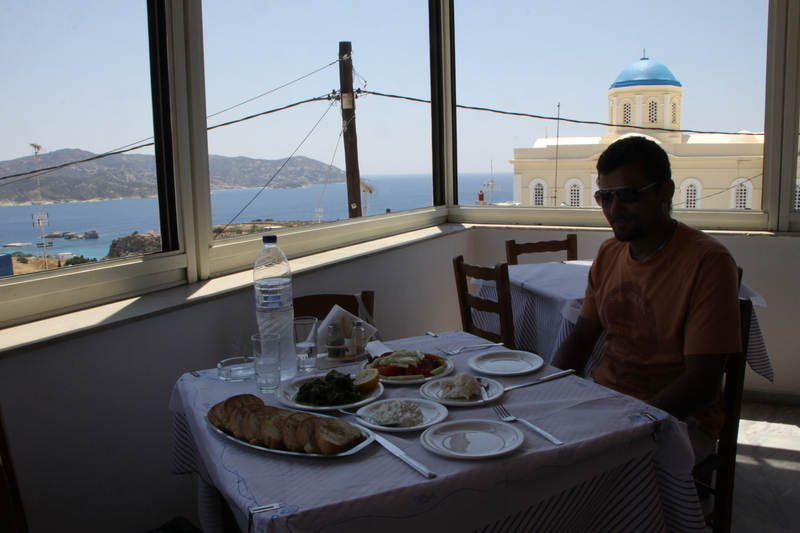 Download IMG_0812.MOV
We order Greek salad, horta, local cheese and tzatziki.  The cheese is a heavily salted cheese that I can't eat.  It is very similar to mish - a type of cheese that Peter's mother makes with milk from their water buffalo - Peter loves it and eats it all! 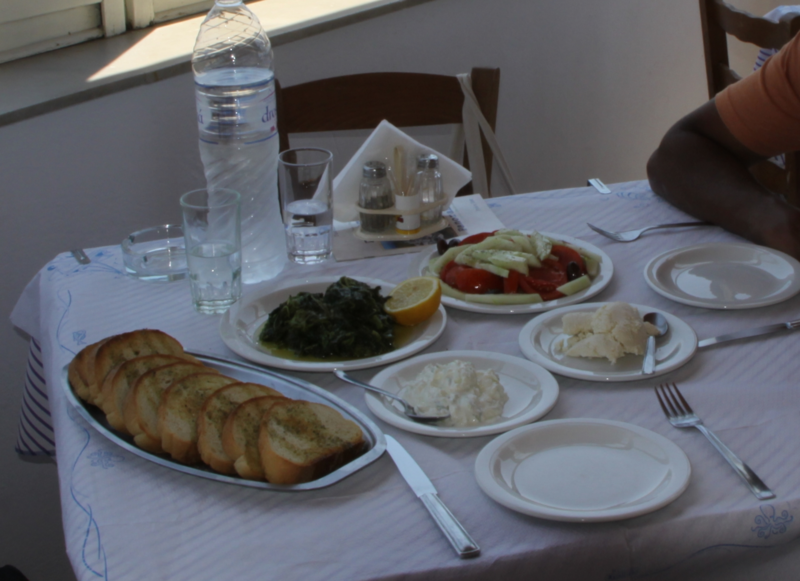 The remaining time we have is spent walking around the delightful little chora.  We pass through narrow alleyways where the local residents sit outside their back door in the shade surrounded by pots of brightly coloured flowers .  It feels a little intrusive and as though we are walking through their garden but we are always met with warm, friendly smiles and "Kalimera". I wish we had more time to spend here - I'm sure there is a completely different feel to the place in the evening. 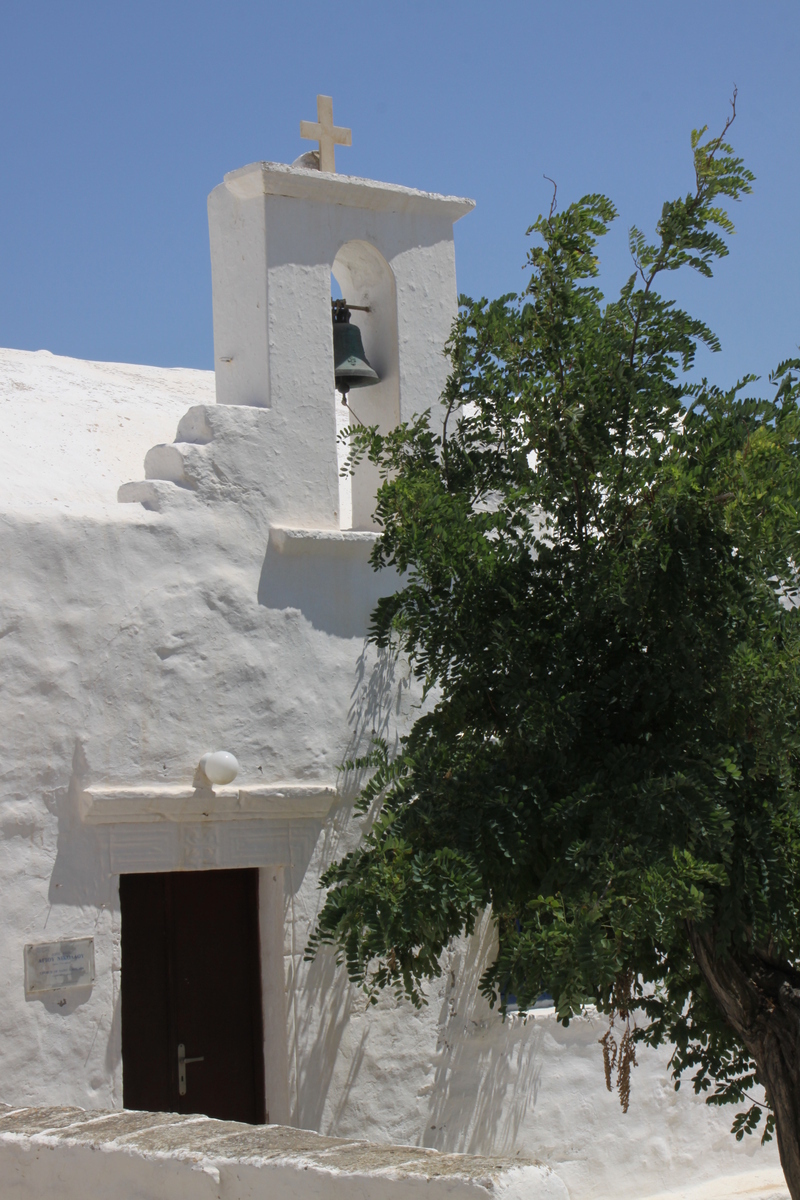 Download IMG_0815.MOV
We have twenty minutes to walk back down to the port to catch the ferry back to Milos - we can see that it is in the port already.  We walk past an old windmill that has been converted into holiday accommodation.  According to the website it was known as the Doctors Windmill.  It looks like an amazing place to stay on the website:
http://www.kimoloshotel.com/en/ 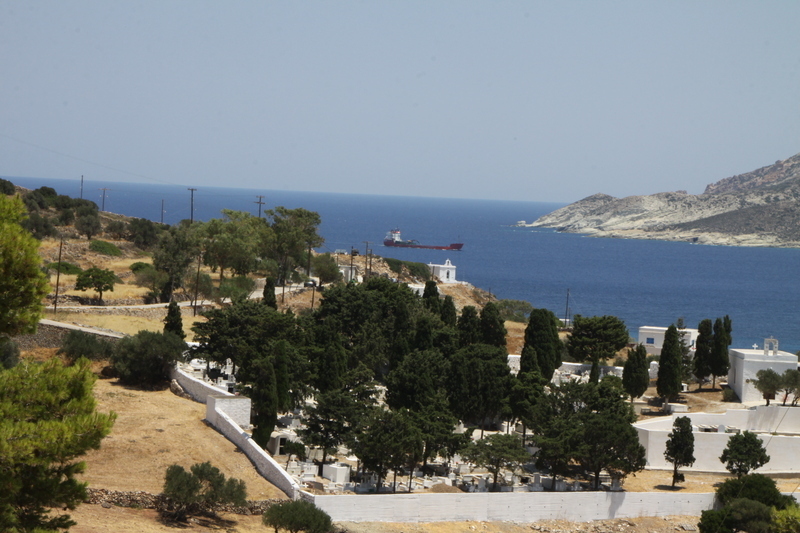 We have a few minutes left before the ferry leaves - we watch the repair work to the harbour wall before we depart.
Download IMG_0820.MOV
The website Miloterranean provides fantastic description several Geo Walks on Milos and Kimolos.  Route 5 on Kimolos includes a bit of the islands history and some great photographs of the island.
http://www.miloterranean.gr/geowalks/route-5-kimolos/

Goodbye Kimolos - we must come back and stay longer!
Download Leaving_kimolos_comp.mp4
The journey back to Milos seems to pass too quickly.  Tomorrow we're leaving the islands for Athens on the Speedrunner 3 which has fixed seating inside.  We take the time to enjoy our last moments on the deck of a boat.  We are mesmerised by the landscape that passes us by - islands that appear to have nothing but a solitary church on its peak and tiny islets jutting out of the sea, defiant and threatening to all ships that dare to venture! 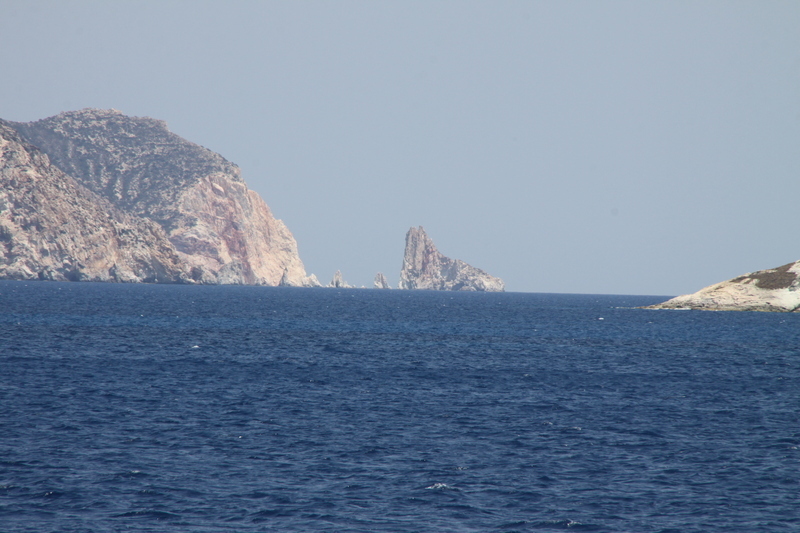 We pass one small island that looks completely uninhabited except for a large monastery surrounded by high concrete walls.  I know we pass three uninhabited island between Kimolos and Milos -  Polyaigos, Agios Efstathios and Agios Georgios. I can't find any reference to the monastery with any of them so I can't give more information on the monastery at this point. 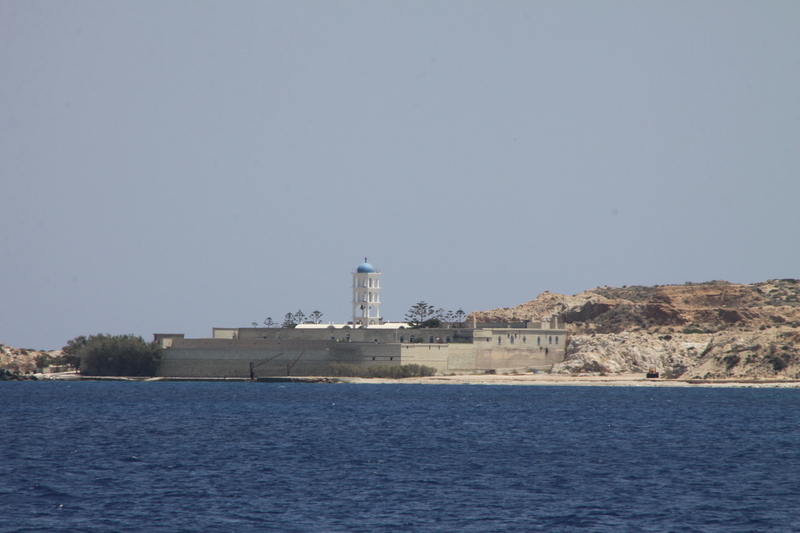 Back at Pollonia we spend the rest of the day on the beach relaxing, squeezing every last minute out of the beach that we can.
Download IMG_0832.MOV
After the lunch we had on Kimolos we have no appetite so we go to Rifaki Cafe bar for ice cream.  We sit and watch the sea roll in and out until late.  Tomorrow we leave for Athens.  No more beaches - but certainly plenty to look forward to! 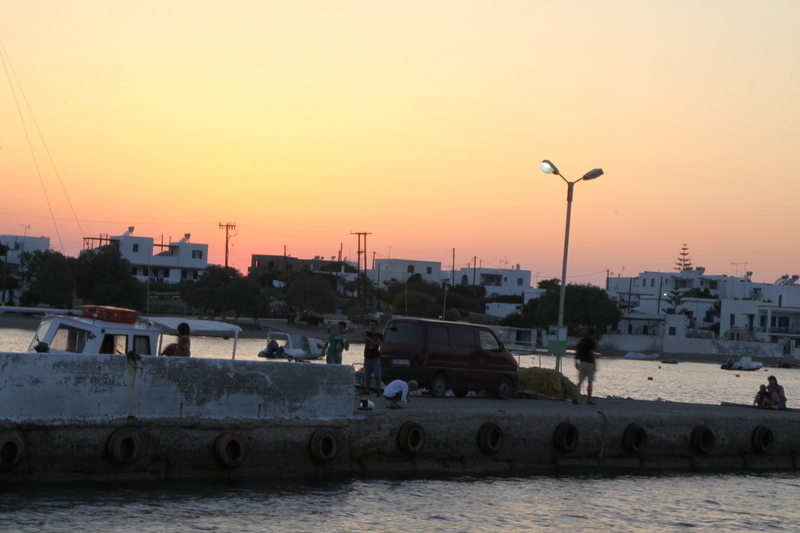