When we arrived at the port of Adamas on the Seajet last night, there was plenty of choice regarding rooms - there were at least a dozen or so people were waiting with photographs of rooms for rent on the island.  Peter and I still hadn't decided where to stay but we had thought that it would either be Adamas itself because of the good bus service or the old town of Plaka up above and north of the port.  I'd had a look on Trip Advisor earlier and there had been very good reviews for a place called Giannis.  As soon as I saw Giannis himself the decision was made!  Similar prices to Folegandros, 30 euros for a room and 35 euros for a room with a kitchen - we went for the latter.  The room was very spacious with 3 single beds, a table and chairs, a dressing table and a small separate kitchen.  The balcony overlooked Giannis garden which was full of basil and marigolds. 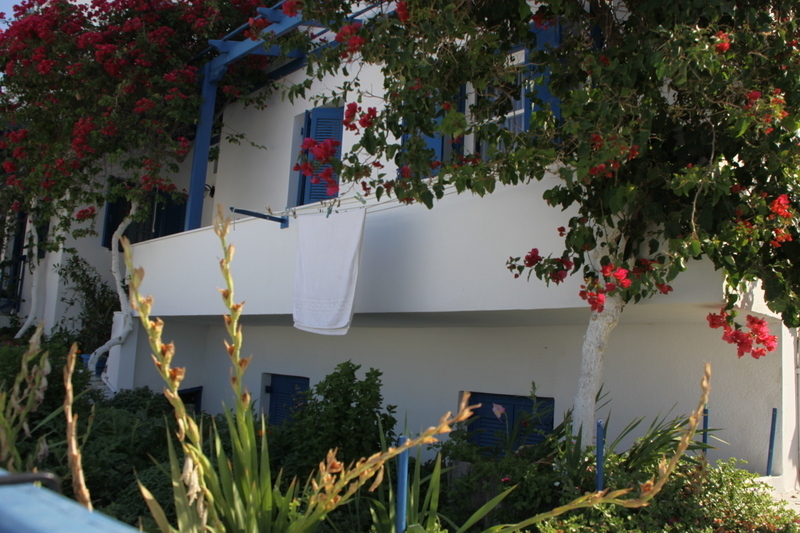 We start the morning with breakfast in a cafe overlooking the harbour.  The port of Milos reminds me of the port of Kos - a little nondescript. There's nothing particularly endearing about it until you start venturing up into the streets above the old town towards the large church.  Because Milos has been relatively late in developing as a tourist destination, the waterfront bars are modern and lack personality. I don't know what I'd expected of Milos but whatever it was, I felt as though I'd been hurled back into reality after our stay on Folegandros.  This is  a much bigger island - just compare the population of 5000 to the 700 on Folegandros! 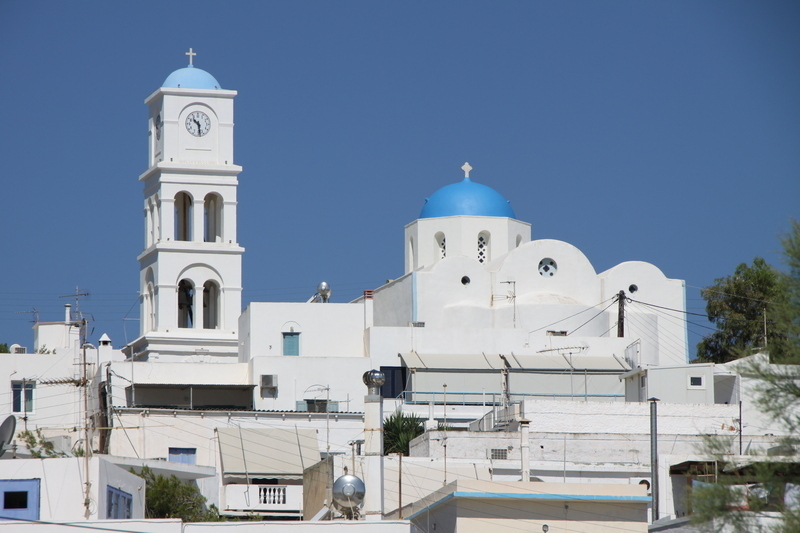 The bus stop is only a few minutes walk from Giannis so is certainly handy for getting around this large island. Today we are going to visit the catacombs so we first have to catch the bus to Tripiti.  We have plenty of time before the bus leaves so we start the day with breakfast in one of the cafe's overlooking the harbour.  Although these port front cafe's lack personality, the staff don't and the service we receive is very friendly indeed.

We walk back to the bus stop and board the bus - there is still 5 minutes before it leaves.  An elderly Greek gentleman with a cheery smile, takes a seat adjacent to us.  He gives us each a sweet and then asks us in broken English where we are from.  After a short conversation he turns to a group of Italians at the back of the bus and in Italian he asks them the same (I can piece the bits of Italian I know together enough to make this out).

The driver boards the bus and sets off out of the town which is scheduled to stop at Plaka before we need to disembark for Tripiti. 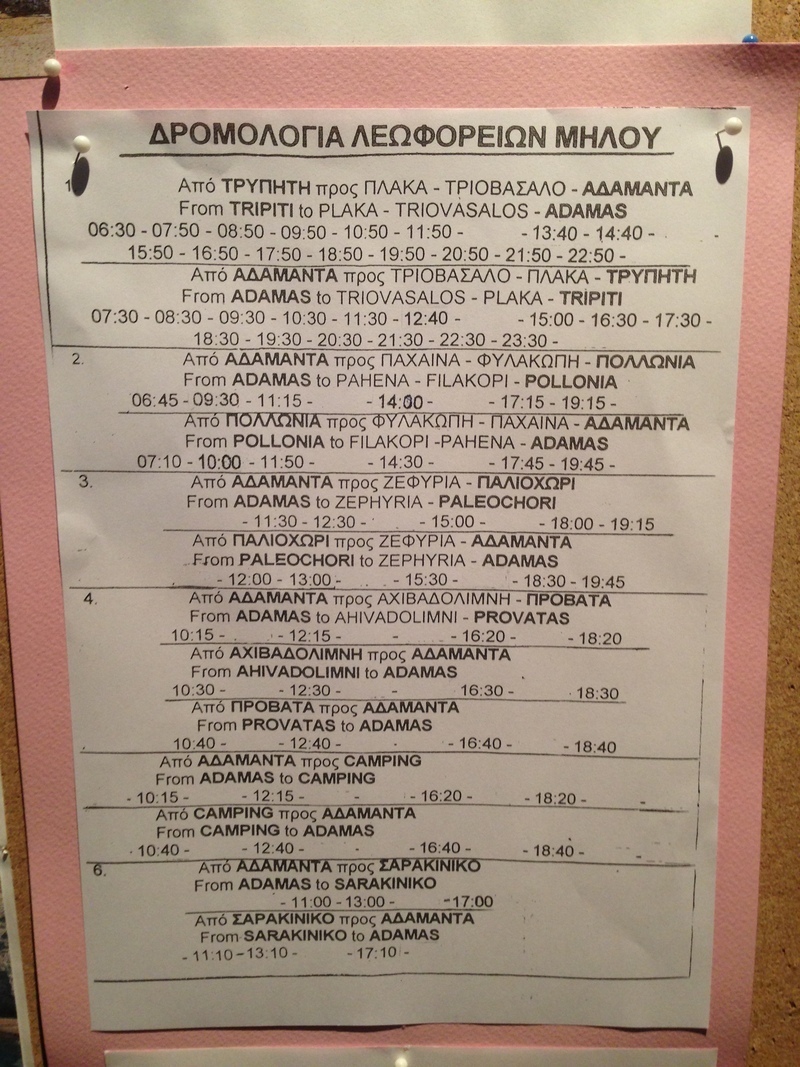 As the bus begins to climb up the side of the island, I notice the bright white chalk in the hillside with large holes that have been worn away by wind and time.  Milos, a volcanic island has an unusual geology in the fact that it has good resources of chalk, obsidian, bentonite, sulpher and flint.  I had read that Milos is the only Greek island where flint has been found naturally and that records of flint found across Greece has demonstrated how extensive sea travel was even in ancient times.  It is because of the mining industry on Milos that it has well developed roads and although the mines scattered around the island don't look particularly attractive, it is still a thriving industry and a major part of the economy today. 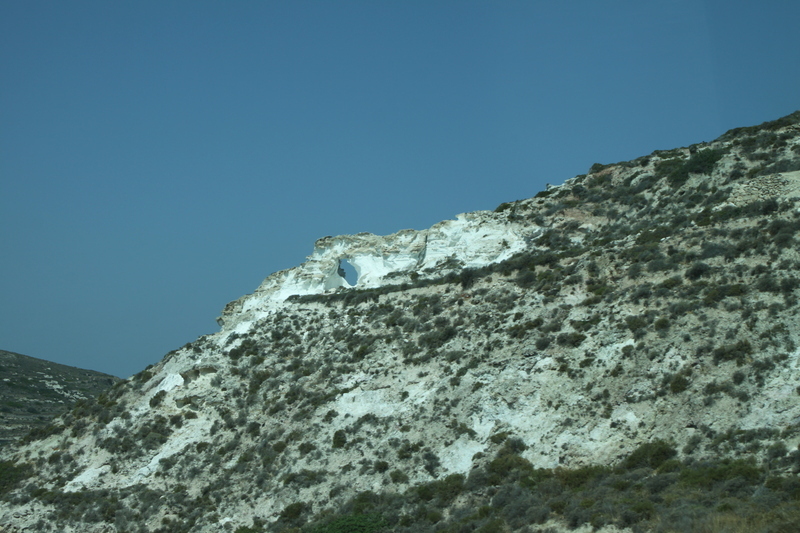 The bus stops at Plaka and Peter asks the old man how far it was to Tripiti to which he replies "Ten minutes is too much".  Ah - less than 10 minutes!
We disembark from the bus at Tripiti on a street lined with residential properties and tavernas.  Our guide book tells us that we need to walk to the T junction and from here take a right down the sloping road to the ancient Christian catacombs.  It also tells us that if we want to see the spot where the Venus de Milo statue was discovered and also the Roman amphitheatre, we will find a path forking off to the right.  We decide to do this first.
It was a little confusing at first, but we did find the site where the Venus de Milo statue was discovered.  It is a rather forlorn place marked only by a road sign and just off the road, there is a plaque under a cluster of trees next to where the statue was exhumed. 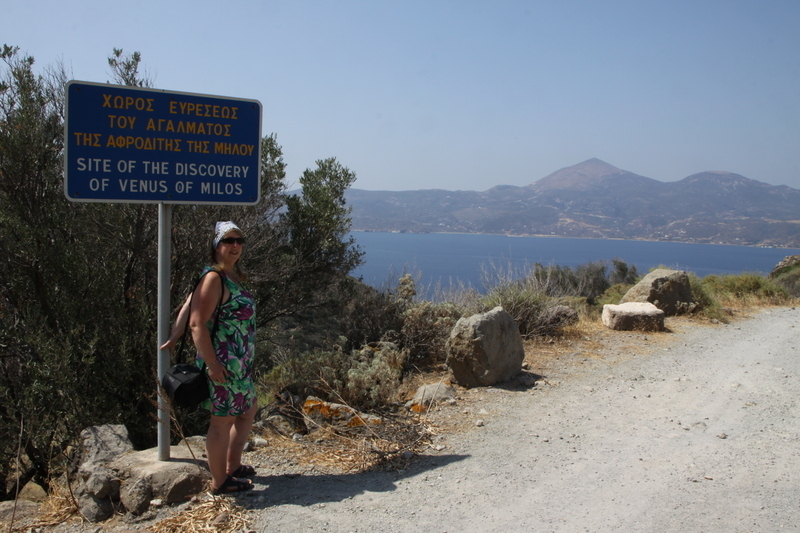 Very close to the Venus de Milo discovery spot is the Roman Amphitheatre which looks as though it is undergoing some remedial works. 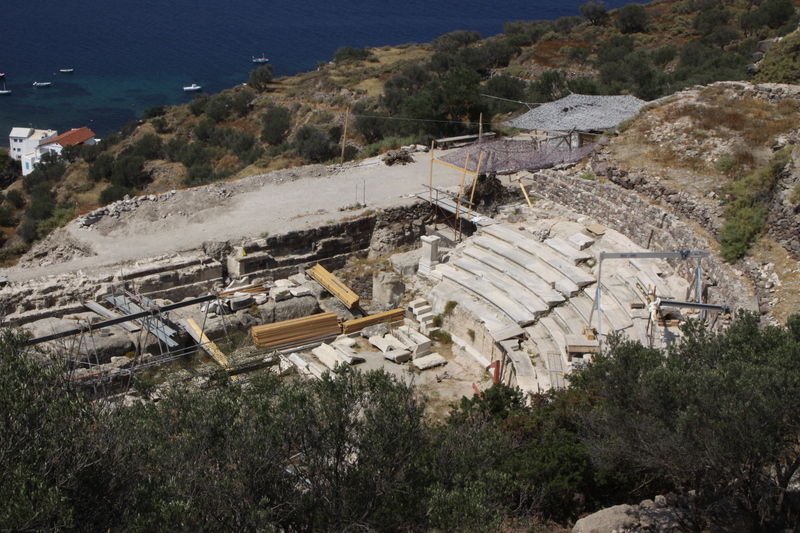 The view from up here is stunning.  I can see windmills atop terraced hills and in the distance a white church sits on a large mound overlooking the bay.  If I've read the guidebook correctly I think this is where the kastro can be found.
The land that we can see across the water is Milos where it curves around on itself.  Imagine if you will the shape of a horseshoe.  Tripiti sits on the inside edge of one tip of the horseshoe and is looking at the tip on the other side of the horseshoe.  Deep in the middle, on the inner edge is the port of Adamas.  I remember as we approached Milos the day before, the catamaran slowed down considerably to navigate around the rocks sprouting out of the sea - one looked like a huge sharks fin.  Because we were following the GPS position of the boat we could see it had yet to enter into the deep bay - everybody else had leapt to their feet, grabbed their luggage and positioned themselves in front of the doors.  We enjoyed the remaining fifteen minutes sitting from the comfort of our seats! 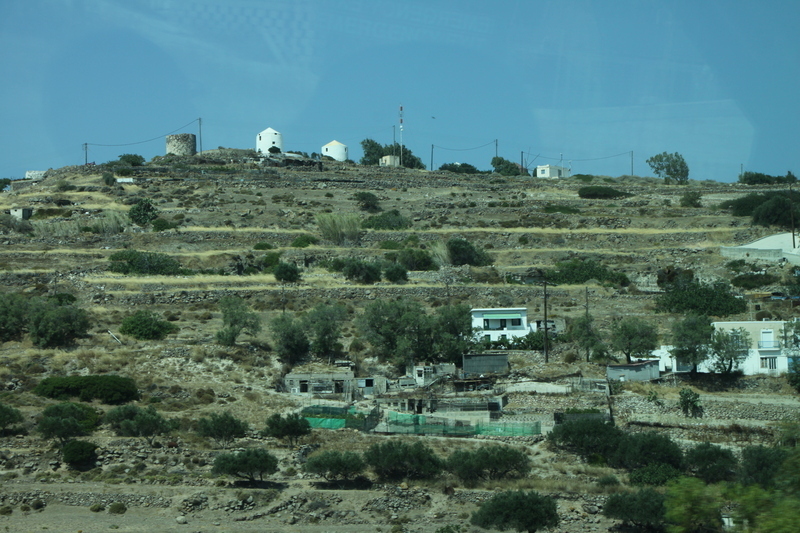 It is also extremely hot today and the breeze sporadic.  We continue down the hill to the catacombs - I try to catch bits of shade cast by trees along the roadside but they are few and far between.  At last we're here.  We walk down paved steps to a small kiosk where we purchase our tickets. A guide takes us and two other couples down a few stone steps into the catacombs.  According to the catacombs website these are thought to be the most important early christian catacombs in Greece.
http://www.catacombs.gr/ 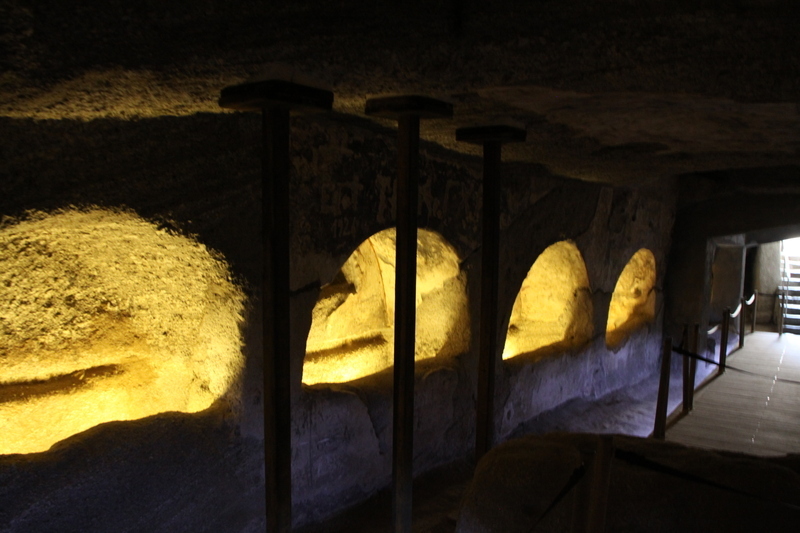 It was incredibly humid inside the catacombs.  When we emerged into the albeit light breeze, it was like taking a cold shower after a sauna! 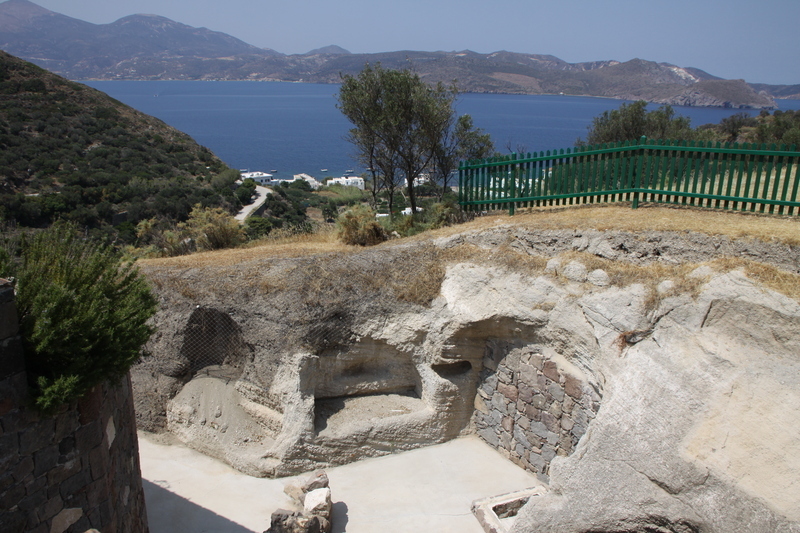 I had really wanted to continue the walk down to Klima to see the brightly coloured fisherman's houses along the sea front.  Although I think I could have walked down, I just couldn't imagine how I would have been able to walk back up this steep hill in the searing heat.  Well - I believe you should always leave something to visit in case you return to the island another time!
I really should stop winging about the heat but the climb back up to Tripiti village is a killer.  However, once back up on the main road the narrow winding streets offer some fantastic and much appreciated shade. 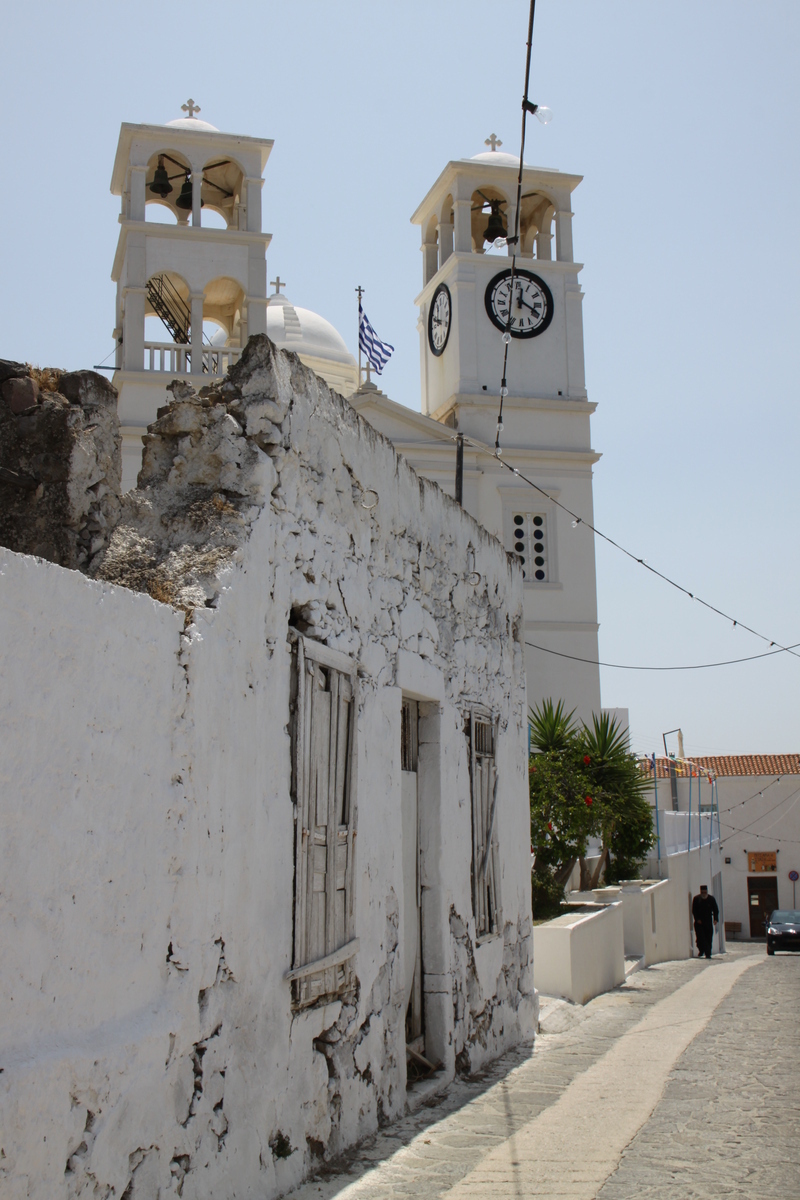 We see a sign for a bus station and follow the road around until we find a bench with a shelter sitting in a small lay-by.  I have a desperate urge to go to the sea so we check the timetable to see what time the bus leaves for Pollonia.  We have about two hours before the bus leaves so we find a little taverna where we can re-hydrate ourselves and, although I have no appetite we decide to have a little something to eat too.  We find a quaint little place on the main street that overlooks a small garden.  We order Greek salad which comes with a huge loaf of bread that we are unable to finish. 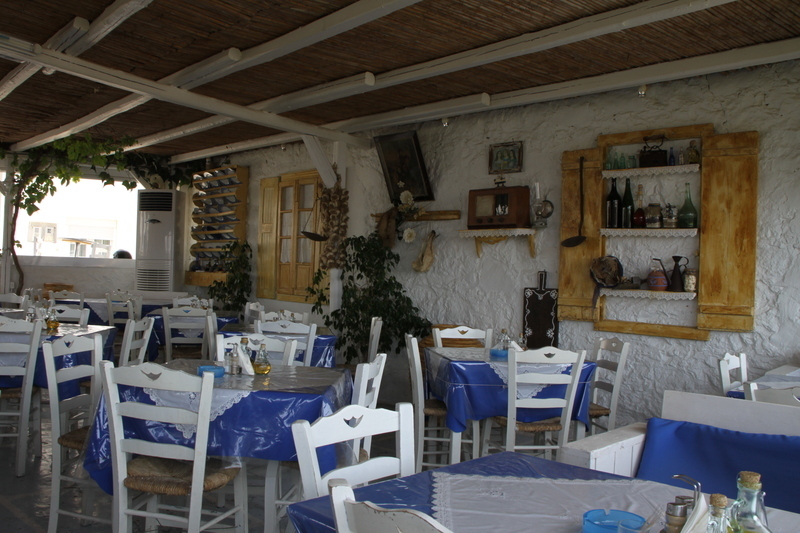 After killing some time we walk back to the bus stop and the bus arrives shortly after.  The bus heads back into Adamas before heading out of the town along a different road to the one we came in on.  As we head back down towards the coast again I can see signs of the amazing geology of the islands, caves carved into chalk rocks.  Little did I know that this was nothing compared to what I was to see the following day! 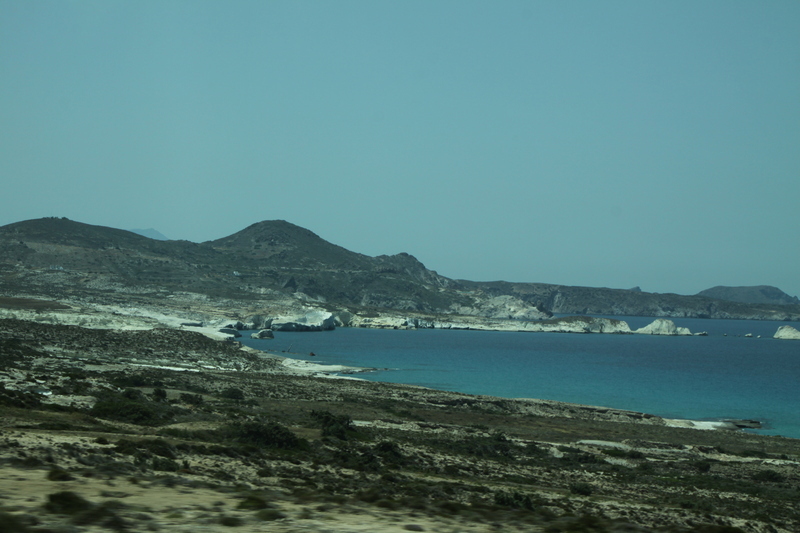 The bus arrives at the little fishing village of Pollonia.  As soon as I stepped off the bus I felt like Milos had just redeemed itself.  I realised then that we were just staying in the wrong place.
Just beyond the bus stop is a small row of tavernas skirting the edge of the beach and along the shoreline.  Tamarisk trees provide natural shade and the beach is narrow and sandy - perfect!  Instead of settling down here though we walk past the row of tavernas towards a whitewashed church.  Past the church is another small bay where the water is shallow and crystal clear. (as if it would ever be anything but crystal like!)  Every so often we see a small car ferry shuttle between Milos and Kimolos.  This is definitely where I want to be and I now really want to go to Kimolos. 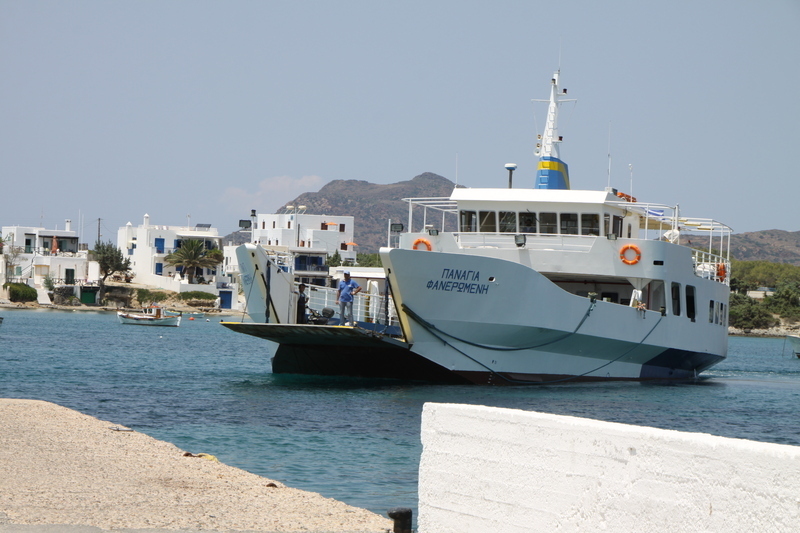 We spend a couple of hours here reading, swimming and sunbathing before choosing a taverna called Araxovoli to eat.  Peter has fish and garlic sauce and I have meatballs. 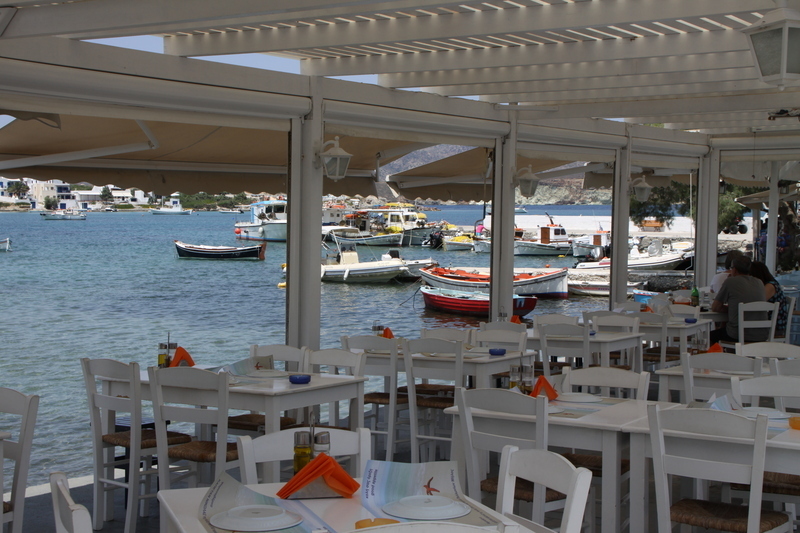 We stay in Pollonia until it is time for the last bus to return to Adamas.  When we arrive back at the port the Agios Giorgios ferry is in and a little while later the Seajet 2 arrives - we stay to watch people board and disembark and imagine the respective emotions of sadness and excitement but never boredom! 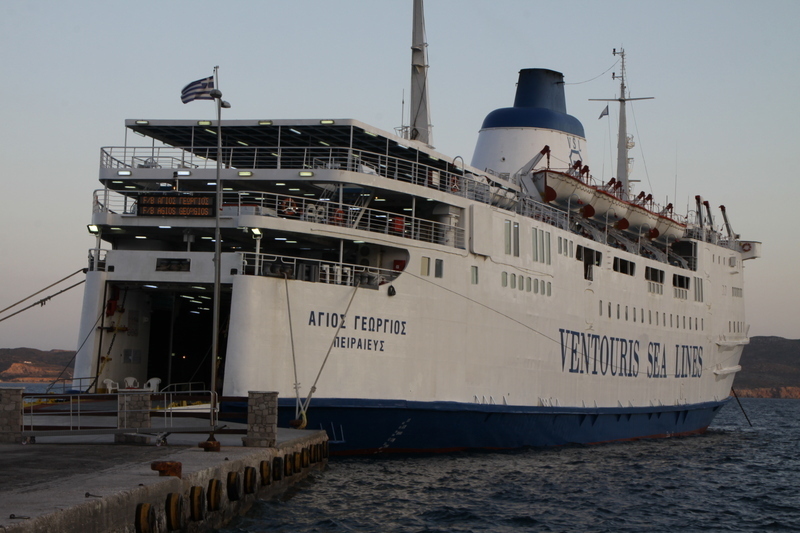